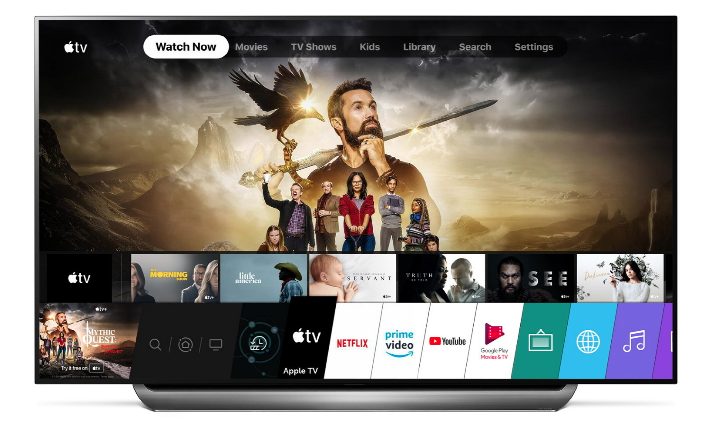 During CES 2020, LG revealed its latest smart TV offerings, which included the Apple TV app pre-installed. Yesterday evening, LG announced that the Apple TV app and Apple TV+ would now be available on compatible 2019 TVs in Canada and 80 other countries around the world.

LG users living in Canada, the US, and many other countries can now find the Apple TV app within the LG Home Launcher app. From there, LG TV users can then subscribe to Apple TV+ and gain access to original content such as ‘The Morning Show’, ‘See’, ‘Little America’ and the upcoming ‘Mythic Quest: Raven’s Banquet’.

The Apple TV app will also let users access their iTunes libraries to rent, and purchase TV shows and movies. We can confirm app was available and showing on 2019 LG OLED TVs, such as the C9, on the weekend.

Compatible 2019 LG TVs can also take advantage of AirPlay and HomeKit. Using AirPlay 2, users can mirror their content from an iPad, iPhone, or Mac to their LG TV screen. HomeKit will let users control their TV using Siri from their iPhone or iPad to navigate menus, power on their TVs and change the volume.

In addition to the 2020 models, LG revealed that compatible 2019 TV models include all OLED TVs, SM9X and SM8X Nanocell TVs. Later in February, the Apple TV app will be added to the UM7X and UM6X series models as well. LG plans to update 2018 TVs this year via a firmware update, but no specific window for the rollout has been divulged.