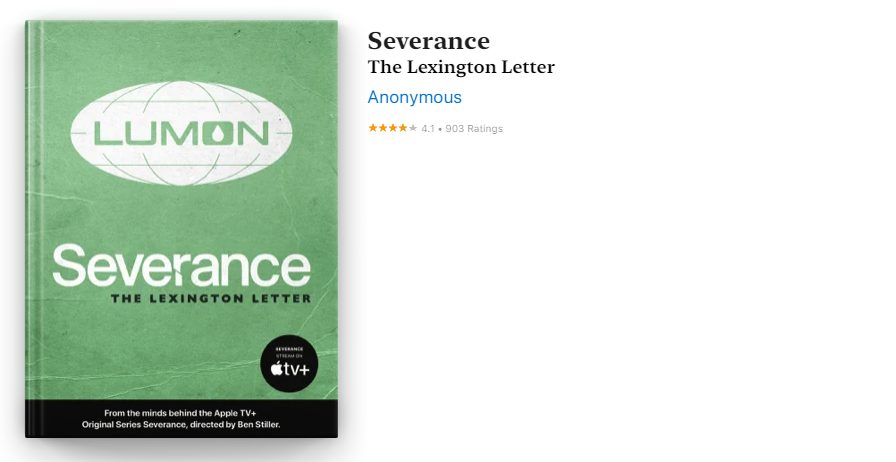 For fans of the Apple TV+ original Severance, there’s a short story set in the same universe as the drama series is available on Apple Books, plus even contains a companion “employee handbook” for those working at the fictional corporation featured on the show (via Reddit).

Severance: The Lexington Letter does not touch upon the main storyline of the show but does drop some neat tidbits of lore here and there. The book carries the same essence as the series and comes from the same team.

When does the cost of staying silent become greater than the price of speaking up? A desperate woman risks everything to expose the sinister company at the heart of Severance, the thrilling Apple Original series from director and executive producer Ben Stiller and creator Dan Erickson, now streaming on Apple TV+, about a daring experiment in “work-life balance.”

The book has a 4.1-star rating on Apple Books with over 900 reviews. “If you like the show you will enjoy this book. It’s a weird experience watching a show and the reading a book that is in the same universe with different characters,” said one reviewer.

Severance is a sci-fi thriller series starring Adam Scott (Parks and Recreation) and Oscar winner Christopher Walken (Pulp Fiction, Catch Me If You Can), among others. The Apple TV+ original has received rave reviews so far, and the first season hasn’t even wrapped up yet.

Last week, the marketing team behind Severance created a dedicated LinkedIn page for Lumon Industries. For those who haven’t watched the show yet, Lumon Industries is a nefarious organization that lets its employees choose to sever their work memories from their personal memories.

The season one finale of Severance is set to air Friday, April 8, on Apple TV+.