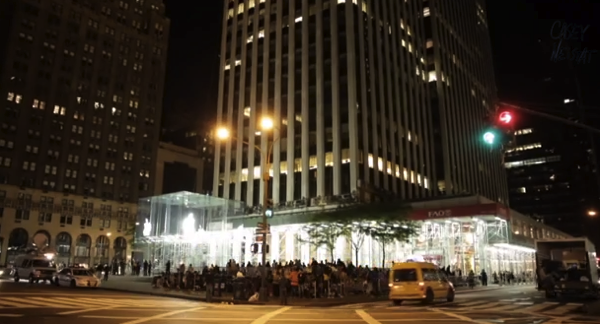 The New York Times reports Apple has used an edited version of a viral iPhone 5s line up video internally to motivate some employees to thank their efforts for a successful iPhone launch.

However, the issue resides in how Apple edited the viral video created by a popular filmmaker, Casey Neistat, which blocks out the latter’s name in its presentation, according to an anonymous Apple employee:

The tweaked version of the movie was sent internally at Apple on Sept. 30 to some customer service representatives to thank them for their hard work on the latest iPhone introduction, according to an Apple employee who received the video and would speak only anonymously for fear of retribution from Apple. The video was sent specifically to customer care officials who focus on troubleshooting iOS, Apple’s mobile operating system, meaning it may have reached thousands of employees.

Neistat, a longtime Apple ‘fan’ felt the edit of his video offensive as all of its credit and branding removed:

“I’ve never had my work stolen so adversely as this,” Mr. Neistat said. “They stripped all my branding off it and put their own name on it in such a harsh way.”

The Apple customer care employee told the NYT the video was pulled from Apple’s server a week ago.

Below is the original video titled “The Dark Side of the iPhone 5s Lines” in its entirety, which has accumulated 3.7 million views. Neistat describes in his video description how all of this hoopla was–just for a phone:

…encouraged by hundreds of equally hysterical employees in blue shirts. at the peak of that hysteria i stopped and reminded myself what the impetus was for all of this; a new phone. that warranted a head shake and an eye roll. it’s fun to get excited about something, no matter how ridiculous it may seem. i went to the Super Bowl once and when the patriots lost my best friend started crying. i can understand sleeping on the street for a new toy more than i can crying over a professional sports game.. it takes all kinds i suppose.