Apple Watch continues to storm ahead of the competition in the North American wearables market.

According to new figures released by research firm Canalys, Apple carved a 37.9 percent market share in the second quarter of 2019. The market research firm claims that Apple shipped 2.9 million units during the quarter. That’s considerably more than those shipped by Fitbit, Samsung, Garmin, or others.

Fitbit maintains a 24 percent market share, while Samsung comes in at 11 percent. The current big player in the Wear OS game is Fossil, who currently holds onto just 4 percent of the market share.

The report suggests the market for smartwatches priced at $500 USD or higher has contracted significantly, with very few shipments coming from the $700 or above price tier. Apple notably discontinued its ceramic Edition watches, which started in that price region, but the company continues to sell leather-banded Hermes models at steep premiums. 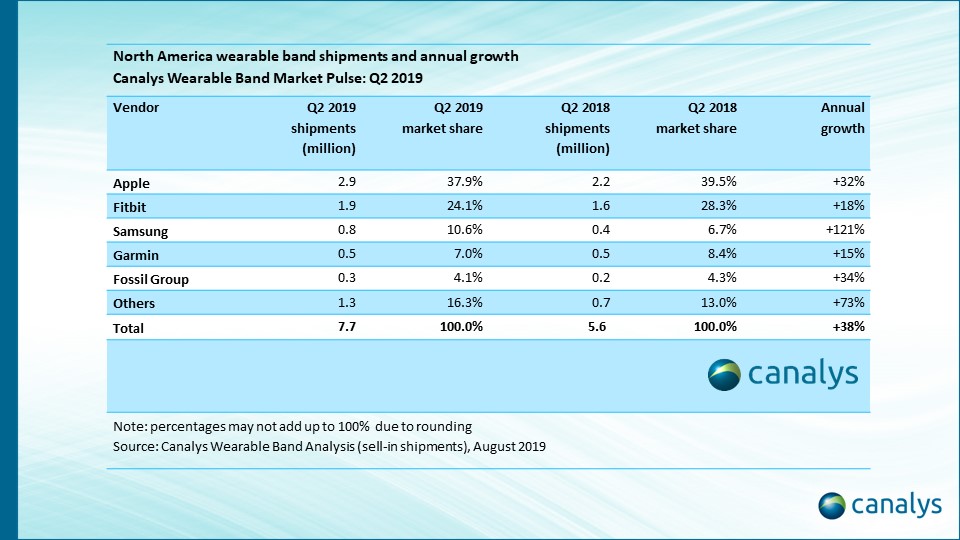 Analyst Jason Low notes that it is “increasingly difficult” for rivals to challenge Apple’s overall lead. “Apple is poised to reinforce its leading position by including aggregated health data, which can reveal new trends and insights, both for consumers and the broader healthcare ecosystem,” Low continues.

Apple holds a strong position in the smartwatch segment that is unlikely to be challenged in the near future, partly thanks to a focus on health features like ECG and fall detection in the Apple Watch Series 4. Some pain will be felt by all the key players in the US wearables market when the 10 percent import tariffs come into effect this fall.