Toronto-based YouTube channel Unbox Therapy has uploaded a new video to showcase what is said to be the Ion-X glass cover from the 42mm Apple Watch, acquired from Apple parts leaker Sonny Dickson. 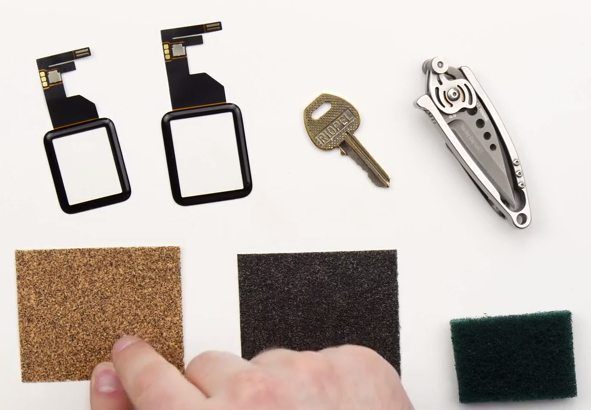 The test reveals the Ion-X sport glass part will resist scratches from a key, knife and steel wool, but when moving onto tougher sandpaper, it scratches as expected.

To keep the Sport collection models as light as possible, we used an aluminosilicate glass that’s especially resistant to scratches and impact. It’s fortified at the molecular level through ion exchange, with smaller ions being replaced by larger ones to create a surface layer far tougher than ordinary glass.

Check out the scratch test below:

While there’s no way to verify this is indeed an actual Apple Watch Sport Ion-X glass cover, the video does show a part that looks legitimate, if it actually was acquired through one of Apple’s parts suppliers from Asia.

What do you think? How often would you be in a situation where your Apple Watch Sport would face sandpaper?