While Apple has previously stated Apple Watch is set to launch in “early 2015”, retail chief Angela Ahrendts has relayed to retail employees the wearable will debut in the spring, reports 9to5Mac. The announcement was made in a video message from Ahrendts to retail employees:

While explaining that employees need to conserve energy for upcoming shopping seasons, Ahrendts stated, “we’re going into the holidays, we’ll go into Chinese New Year, and then we’ve got a new watch launch coming in the spring.”

The Apple Watch page on the company’s American website denotes a launch in “early 2015”, as seen below:

But on Apple Canada’s website, the device availability wording is different, noting “available in 2015”: 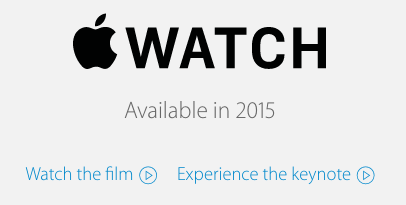 Apple’s websites for other countries such as for Australia and the United Kingdom also state “available in 2015”.

Does this mean the Apple Watch will launch exclusively in the USA first, like we saw with Apple Pay? If that’s the case, then Canadians and the rest of the world will most likely be on the outside looking in again.

If an international launch is scheduled after the USA, it would probably allow Apple more time to ramp up supply, but also drive intense demand for the watches on the grey market, especially in markets where luxury goods are seen as status symbols, such as China (18K gold Apple Watch Editions anyone?).

Apple Watch has been described by Apple design chief Jony Ive as more challenging to create compared to the iPhone, due to “cultural, historical implications and expectations” for the wearable.