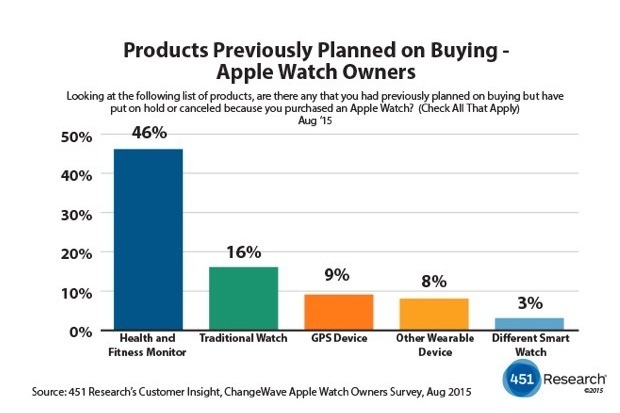 According to 451 Research (via ComputerWorld), Apple Watch users seem to have stopped using traditional watches. The research notes that 54% of Apple Watch users say they are “very satisfied” with their device, while an overwhelming 82% of Apple Watch owners, who also have a traditional watch, say the Apple wearable has replaced it. Around 33% of users said they were “somewhat satisfied” with the device, while 6% each were found to be in the “somewhat unsatisfied” and “very unsatisfied” camps.

The Watch has replaced other third party products, including traditional watches and dedicated health and fitness monitors, the researchers claim – 16 percent have even cancelled a planned watch purchase to get hold of an Apple Watch.

Jitesh Ubrani, senior analyst for IDC, recently said: “About two of every three smart wearables shipped this quarter was an Apple Watch. If this trend continues it seems likely we’ll see more decline in traditional wearables sales, and the company is already expected to dominate this segment until 2019.

The researchers claim that 28% of Apple Watch owners say their new smart watch Exceeds expectations, while 51% say it Meets expectations. Notifications, health and fitness monitoring and aesthetics/design are the top three features, while battery life is the most disliked attribute of the product. Other things people didn’t like include lack of waterproofing, selection of apps and learning curve.

Analysts have also noted in the research report that “When Apple Watch owners were asked whether they’d recommend their new device to a friend or colleague, a robust 83% say they’re Very (55%) or Somewhat Likely (28%) to do so”.