Apple has today announced that the ‘WatchKit’ SDK will be made available to developers in November, “just in time for app creation and testing before Apple Watch hardware debuts early next year”. Apple CEO Tim Cook took the stage earlier today at the special media event, highlighting how the WatchKit for creating apps is tailored for the upcoming Apple Watch. 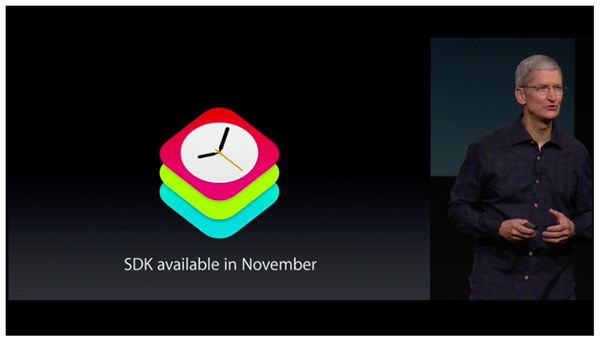 The WatchKit, along with HomeKit and HealthKit, is part of the company’s larger effort to open up its devices to third-party devs, allowing them to create new features for its lineup. Tim Cook revealed during the keynote that a number of third-party apps are already available for the wearable, including Twitter, American Airlines, Starwood Hotels (for unlocking your room door), Pinterest, BMW (with a car locator service), Honeywell (for connected home control) and others.

Apple did not announce any specific date for Apple Watch today except for noting an “early 2015” release.