When VirnetX won a $368 million patent trial against Apple over the use of its patents (related to Apple’s FaceTime), the company’s shares spiked. But what goes up, must come down, right?

But today, the win for VirnetX was overturned in court as Apple won an appeal, sending the case back to trial, reports the Wall Street Journal:

The U.S. Court of Appeals for the Federal Circuit, a Washington-based court that handles patent dispute appeals, ruled the verdict was “tainted” by erroneous jury instructions in the case. The court also held some trial testimony from a VirnetX expert should have been excluded from the case.

At issue were VirnetX claims the FaceTime feature on Apple devices, as well as a feature related to virtual private networks, infringed the firm’s patents.

Shares of Nevada-based VirnetX plunged on the ruling, down more than 40% in recent trading.

The case now goes back to a trial court for further proceedings.

But with today’s setback, VirnetX shares have plunged a massive 49.5%. Take a look at the stock chart below for the day: 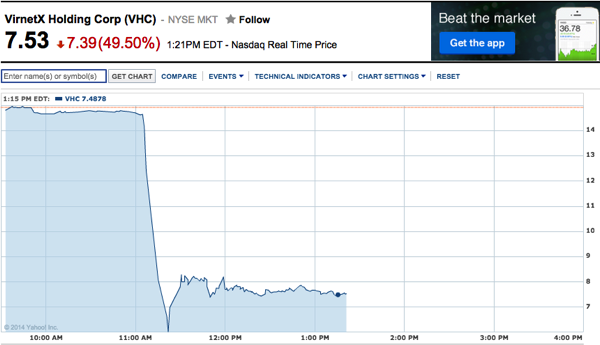