Brand valuation consultancy Brand Finance has listed Apple as the world’s most valuable brand with a brand value of $104.7 billion, up 20% from the previous year. However, the company’s main rival Samsung is gaining fast, holding the number 2 position on the list with a brand value of $78.8 billion, a 34% gain from the previous year, 24/7WallSt is reporting.

Apple’s dominance is being challenged by Samsung. The Korean giant’s improving reputation for reliability, a faster pace of innovation and wider range of devices are among many factors that have seen its brand value increase by US$20 billion to US$79 billion this year.

Google sits 3rd on the list with a brand value of $68.6 billion, up 32%. Microsoft is 4th at $62.8 billion while Verizon Communications comes in at number 5, posting the top percentage gain among the top 10, up 74% to $53.5 billion. General Eleentric Co., AT&T and Amazon took the 6th, 7th and 8th spot respectively, with Wal-Mart Stores coming in at 9th and IBM at 10th position on the list. 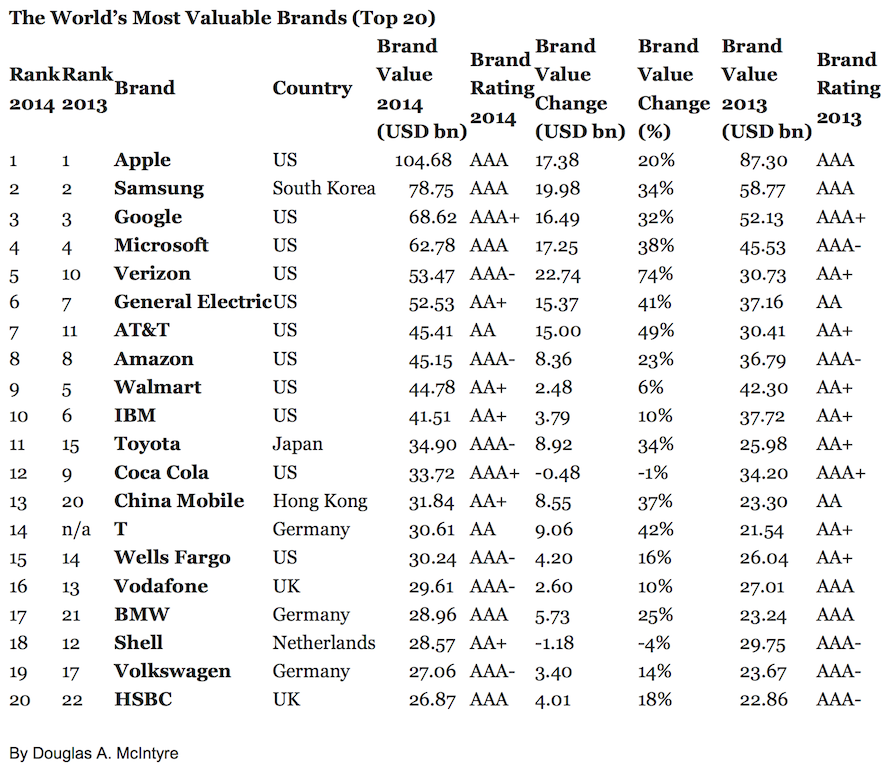 US brands continue to dominate the Brand Finance’s list, occupying 185 brands of the 500 spots. Japan is second. Despite Japanese brands having dropped out of the table, the total for the country as a whole is up thanks to brand value increases of over 30% from Japan’s three biggest brands; Toyota, Mitsubishi and Honda. President Shinzo Abe’s ‘Abenomics’ programme has begun to pay off and global demand for Japanese goods is improving. Germany, France and the UK complete the top 5.

The report also notes that the banks are at the top of brand value by industry at $633 billion, followed by technology at $614 billion.