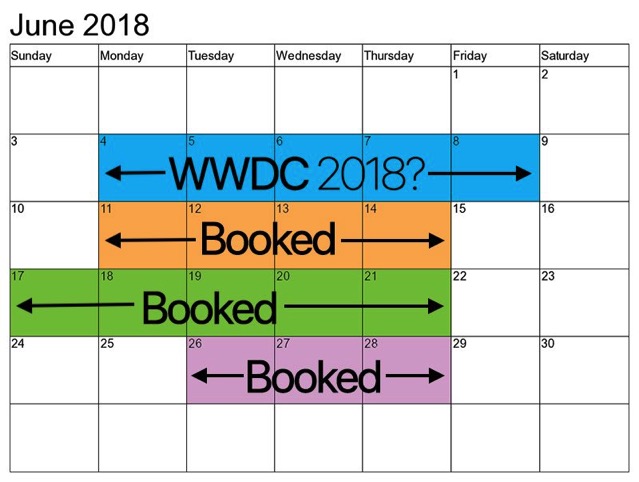 While Apple is yet to officially announce the dates for its Worldwide Developers Conference (WWDC) 2018, the folks over at MacRumors believe they have enough evidence to suggest that the event will take place between Monday, June 4 and Friday, June 8 at the McEnery Convention Center in San Jose, California, the same venue as last year.

“First, we’ve heard from a reliable source who says WWDC will in fact return to the McEnery Convention Center for the second consecutive year, after having been hosted at the Moscone Center in San Francisco between 2003 and 2016.

Next, we’ve discovered that the McEnery Convention Center is already booked with other events during the second, third, and fourth weeks of this June, leaving the first full week of the month as the only available window for WWDC 2018, barring the rare possibility that Apple shares the space with other events simultaneously.”

For those who aren’t aware, WWDC has been the iPhone maker’s annual developer event since the 2000s, where Apple unveils the latest versions of its software platforms. Some big hardware and services announcements are also sometimes made during the WWDC’s opening keynote, such as iCloud in 2011, the first MacBook Pro with a Retina display in 2012 and the new iPad Pros in 2017.

This year, Apple is expected to preview iOS 12, macOS 10.14, and new versions of tvOS and watchOS at the event. Tickets will likely cost around $1,599 and be distributed randomly through a lottery like last year. To learn more and sign up for Apple’s developer program, click here.