Alongside making the iPhone, iPad, Mac and the iPod, Apple has introduced another set of revenue categories, such as software, which is part of iTunes. The software category includes sales of OS X, iWork and other pro tools Apple has developed. How does Apple’s “minor” business perform? Horace Dediu of Asymco has the numbers.


As he previously pointed out, iTunes evolved to generate $12.4 billion per year in revenue. Dediu’s estimate is that the iTunes business operated with a gross margin ranging between 15-17%, but this could be higher, resulting in the graph below. 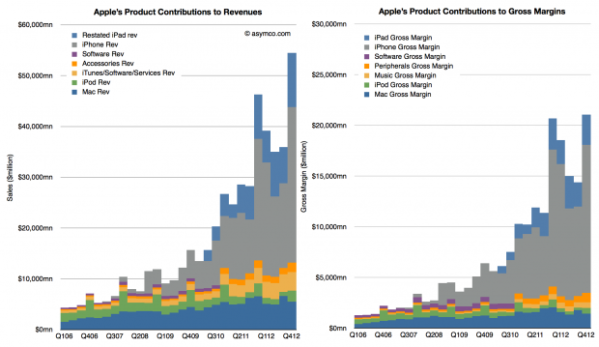 His observations on the above graphics:

1. iTunes now becomes a steadily and rapidly growing business. Growth over the previous two years averages well over 30% and is consistent across seasons.
2. The absolute revenue number is substantial: $13.5 billion for 2012 (up from $10.2 billion in 2011).
3. Assuming a gross margin of 15% to 17% yields contribution of $2 billion in margin in 2012 and $1.6 the year before.
4. iTunes is now Apple’s fourth largest business, having overtaken the iPod in revenues two years ago
5. iTunes growth relative to the Mac means that it could become the third largest business during this year. 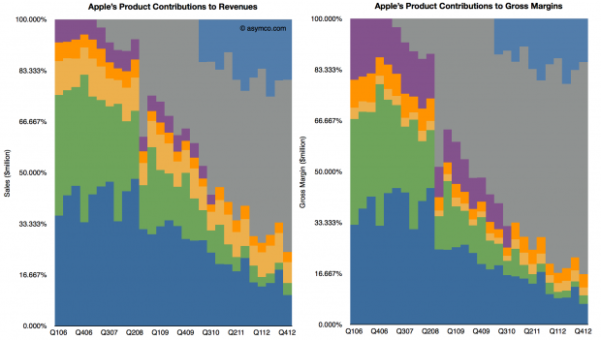 Now if we add the Accessories business – including the Apple TV – these “minor” businesses become bigger than Apple’s Mac business. However – as you may imagine –content, software, accessories and services all depend on a healthy device business. 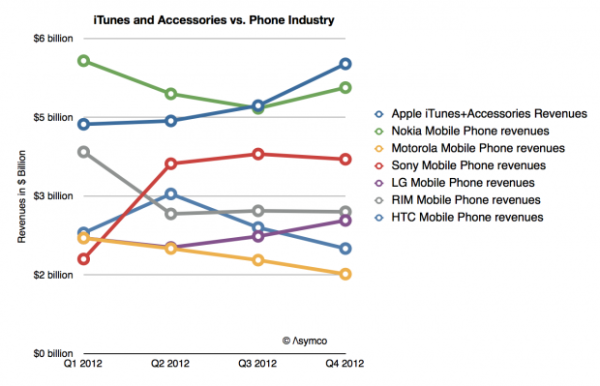 Another interesting highlight of the Asymco report is that Apple’ iTunes and Accessories businesses generated more revenue combined than any other mobile phone vendors except Samsung.