Today, Apple has updated its investor relations page to note that the company will announce its earnings for Q1 FY15 on Tuesday, January 27. The conference call, scheduled for 5:00pm EST / 2:00pm PST will follow the earnings release which is typically released after stock trading closes around 4:30pm EST. 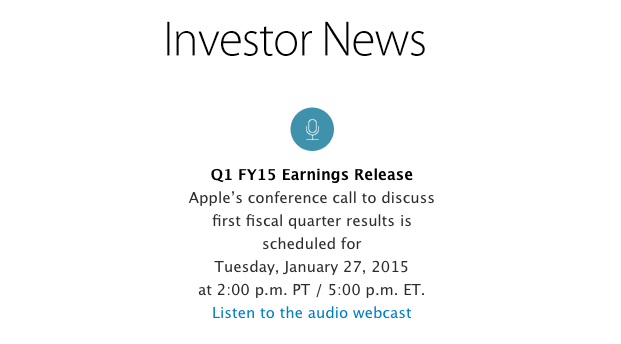 Apple reported a record year-end fourth quarter with $182.8 billion in sales for fiscal 2014. The company sold a record 169.2 million iPhones in fiscal 2014.

Listen to the audio webcast of the earnings call on Tuesday, January 27 from this link.

Streaming service FuboTV announced on Wednesday it has launched three Disney channels within its Premium package. Available now are the Disney Channel, Disney Junior and Disney XD. According to FuboTV, these new Disney channels are part of the company’s partnership with STACKTV, which began last year and added Global, HGTV Canada, Food Network Canada, W Network, […]
Gary Ng
42 mins ago