Today Patently Apple points towards trademark applications filed in Canada by Apple for key iOS 6 apps and icons. Applications were filed for Guided Access, the new Apple Maps icon, Flyover and Passbook (for the name and icon). The interesting part of their report is the reference to the Vienna classification descriptors in the filing for Passbook:

20.5.16 Bank, credit or identification cards, bar-coded or not, magnetic or not

Yes, the iWallet cometh. When it’ll actually arrive however, is another matter. 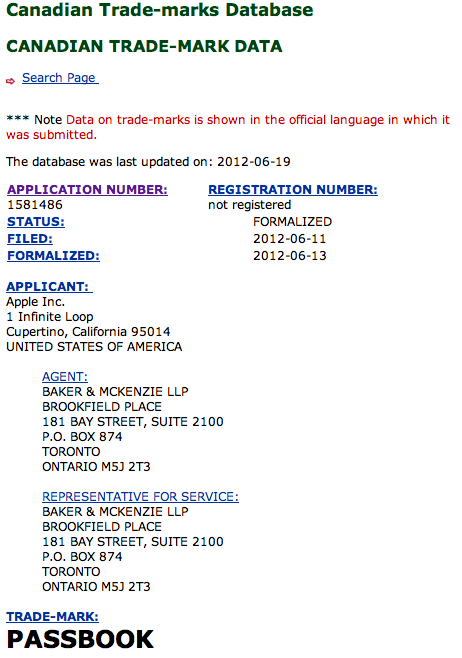 Passbook is described by Apple as “your boarding passes, movie tickets, retail coupons, loyalty cards and more are now all in one place.” The inclusion of a wallet for a digital payment system has long been discussed via near field communication (NFC), which many expect to appear in the next generation iPhone 5 by Apple.

Rogers and CIBC earlier this year announced their plans to release NFC-enabled smartphones with built in credit card payments via MasterCard and VISA. The Royal Canadian Mint also hold their MintChip technology and has reached out to developers for assistance to implement their payment solution. Canadians appear to ready to go digital as a recent survey by PayPal indicated more than 70% of us are ready to go cashless.

As for Passbook acting as an ‘iWallet’, the implementation could be quite easy. Apple revealed at WWDC 2012 there over 400 million iTunes accounts attached to credit cards. Any sort of digital payment system could piggy back off those details, making for a seamless way to pay for goods with our iPhones, in theory.

Amid the tools used by archaeologists for centuries i.e. trowels, buckets, brushes, and pickaxes, there’s a new piece of equipment, the iPad Pro, as highlighted by Apple in a new feature. “iPad is the perfect archaeology machine,” says Tulane University professor Dr. Allison Emmerson. who was part of the team that pioneered its use to...
Usman Qureshi
4 mins ago

Apple’s Stage Manager multitasking feature in iPadOS 16 is only for tablets with the company’s M1 chip, but that is now changing. According to Engadget, Apple told the publication Stage Manager is now expanding to older iPad Pro 3rd gen and 4th gen models when iPadOS 16 is released later this year. M1 iPad Pro […]
Gary Ng
48 mins ago