Asos iOS App Promo: Save 20% Off When Using Apple Pay

London-based online retailer Asos (not to be confused with Swiss cycling apparel Assos) has a promotion right now where all purchases made with Apple Pay within their iOS app, will see a 20% discount on full price items. 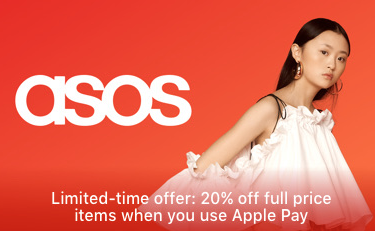 The promo looks to encourage in-app payment with Apple Pay, as the latter was introduced to the Asos app back in late May.

We’ve seen Apple team up with other retailers before to push in-app Apple Pay payments before; back in November, Lululemon for iOS offered a $25 gift card for all purchases of $150 or more.