Asymco: Apple Has Set A New Record For ‘Revenue Per Store Visitor’

According to Asymco’s Horace Dediu, Apple has set a new record for ‘revenue per store visitor’ during the first quarter of 2013. The mobile analyst noted that the Cupertino giant took in a record revenue per visitor of $57.60, continuing to perform twice as well as Tiffany & Co., the second best retailer in the US. 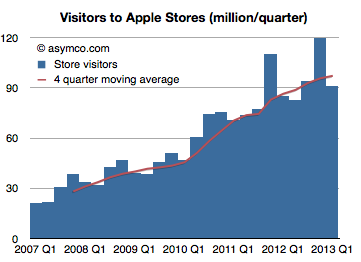 “Here are some additional metrics:

Employment has steadied at about 110 per store. This is a remarkable increase from less than half this level in 2007.

Hiring remains closely correlated with visits with visitors per employee per quarter holding to slightly more than 2000.

The analysis also claims that Apple’s profit per visitor also held steady at about $12 per quarter.