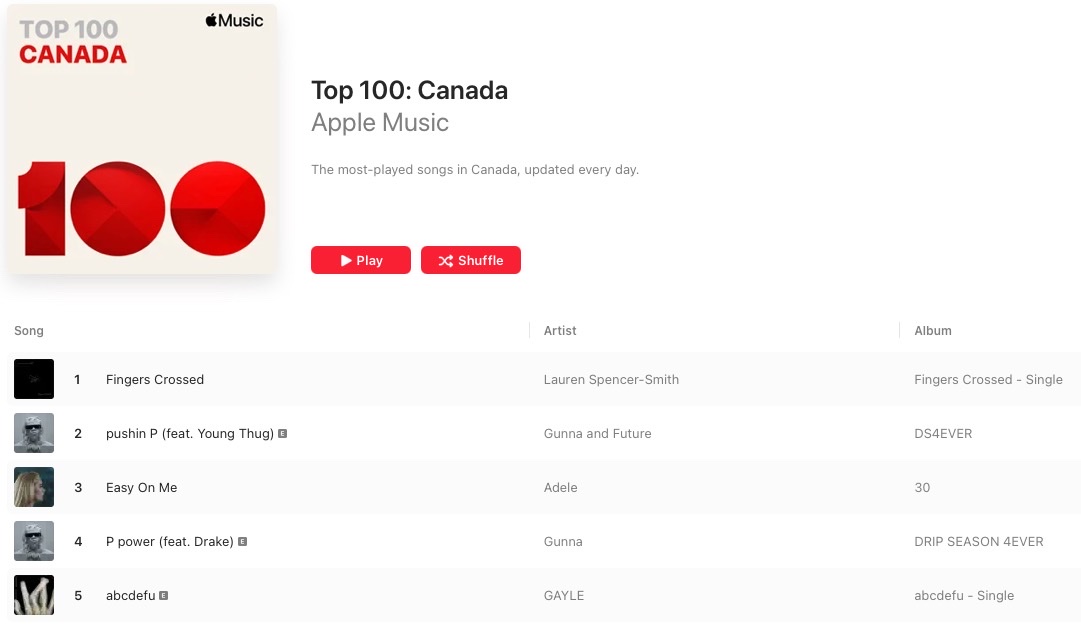 Within 24 hours of debuting, the Port Alberni, British Columbia, resident’s classic heartbreak anthem was streamed on Spotify more than a million times and hit number one in the U.S. on Apple Music and number two globally (via CHEK News).

At the time of writing, Fingers Crossed is number one on Apple Music in Canada, number 12 globally, number 16 in the U.S., #7 in the U.K., and #11 in Australia. The song even held the top spot on Apple Music worldwide for a period.

“This is without a doubt, the wildest week of my life,” Spencer-Smith said about the song’s release in a recent interview.

The 18-year-old Vancouver Islander has had unprecedented success with her new single, but it isn’t as surprising as one would think.

Before releasing the entire song earlier this month, Spencer-Smith posted a snippet of the song to TikTok back in November. The clip went viral, amassing millions of views and ushering in a new trend on the social media platform.

This is called fingers crossed 🤞🏻

“That song specifically has like over 20 million views, a hundred-thousand people have used it. It just became a trend. I’ve never had something like that blow up on the internet before,” Spencer-Smith said in reference to the TikTok snippet from November.

But the singer does have some experience in the spotlight. After a video of her singing while travelling down Vancouver Island captured millions of views in 2019, Spencer-Smith ended up on the 2020 series of American Idol, where she turned heads and received a golden ticket from Katy Perry and the other judges in the auditions.

The teen sensation is now working on releasing a short album this spring, and also plans on going on tour and doing shows across the U.S. soon.

“I just got my U.S. visa approved so I’m moving to the states in like two months and once I have the visa in my hands I can tour and travel and do shows and we’re definitely hoping to do all that starting in the spring,” said Spencer-Smith.