A new white paper released by Canada’s Big 6 banks and the Canadian Bankers Association has analyzed the mobile payment landscape in our country. Their conclusion is consumers have been slow to adopt mobile payments, mainly due to the fact proprietary SIM-based solutions are not ideal, according to The Globe and Mail.

The white paper, published yesterday, notes the perfect scenario for mobile payments in Canada and why it hasn’t happened yet, noting less than 25 percent of consumers can use these systems:

Ideally, consumers should be able to load any of their payment credentials (credit, debit) from any network (American Express, Interac, MasterCard, Visa), onto any mobile device (Android, Apple, Blackberry, Windows, etc.) on any mobile network (Bell, Rogers, TELUS, etc.). This is not possible today. Although there have been several products introduced into the market, consumer adoption remains low due to the deployment challenges associated with SIM-based solutions.

The Payments Security White Paper says the mobile payments industry faces a low acceptance rate, as contactless payments only see between 10-20 percent of total transactions here, noting “Because mobile payment capability is available to a small subset of the consumer population, it is challenging for issuers to communicate and promote mobile payments broadly and awareness of mobile payment remains low.”

The report notes how “the launch of Apple Pay in October 2014 has brought the “open mobile wallet” business model to the forefront,” and that “Apple is in the process of altering the US payments landscape.”

Below is an image of the complex mobile payment landscape in Canada: 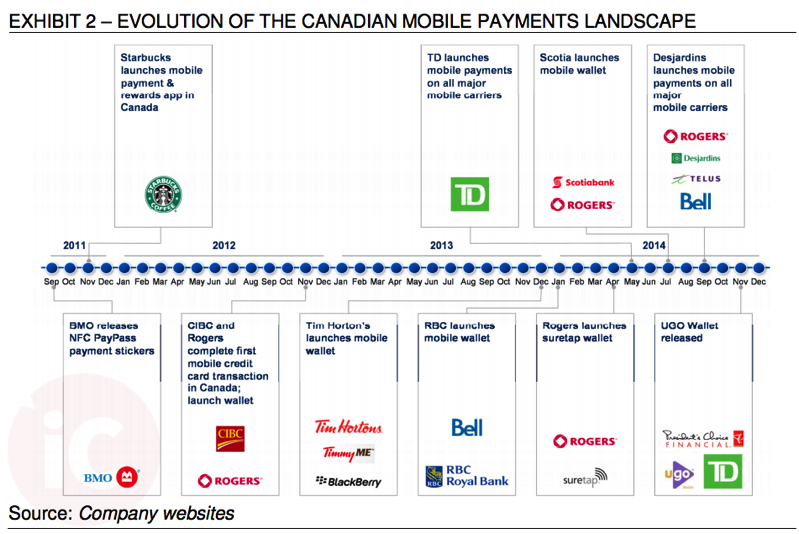 The white paper also says “the expected launch of Apple Pay in Canada will provide mobile payment capability for consumers who carry iPhone mobile devices.” Could this be a hint Apple Pay will be landing in Canada as rumoured for November?

The bottom line is the graphic above explains the problem with mobile payments in Canada. There are way too many carriers and banks involved, plus SIM-based solutions aren’t ideal, mainly because it doesn’t support the iPhone. Apple Pay is going to be a game changer for the first Canadian bank to support it here. There are people ready to change banks because of Apple Pay.

@tim_cook Canada is next, right? 🙂

Just look at the Apple Pay launch in the UK, which kicked off yesterday. HSBC is a supported partner but won’t launch until the end of the month, but has responded to angry customers on Twitter about the delay. Barclays originally said it would not support Apple Pay but has quickly changed its mind.

Canadian retailers already have PIN and chip terminals available that support NFC, so Canada would be the next ideal partner for Apple Pay. All we can do now is hope it comes sooner, rather than later.