According to a representatives from Bell, all new iPhone upgrades will require a new monthly plan. 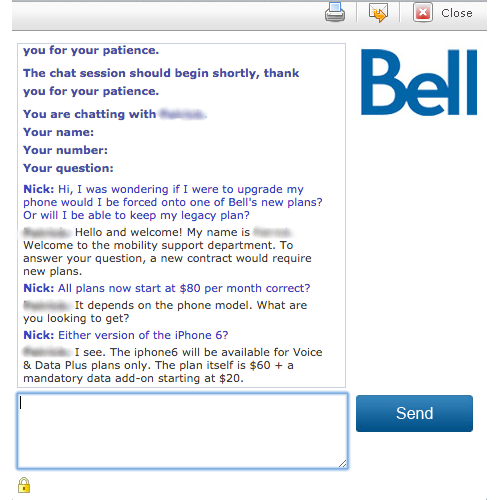 As you can see in the image above, a customer service agent at Bell said that any new iPhone upgrades (all upgrades require customers to sign a new contract) needs to be accompanied by a new plan from Bell. The main portion of the plan is $60 per month and all iPhones require an additional $20 per month data add-on. MobileSyrup has similarly confirmed that Bell will be forcing customers onto their new monthly plans.

If you are an existing Telus customer, the company tells us that you may be able to keep your existing plan, however it depends on which legacy plan you have. The Telus representative tells us if you have been a long-time and loyal customer, the loyalty department should offer you something similar or better than your current plan.

“Telus has legacy plans from $30, it all depends on you tenure and kind of customer you are… I’m sure you are an outstanding client and that’s why you should speak to the Loyalty department and for sure they will give you something similar or even better.”

All new Telus customers looking to purchase the iPhone 6 or iPhone 6 Plus will be required to sign a two year contract with a minimum $70 per month plan.

What are you expecting to pay for your monthly plan if you upgrade to the iPhone 6 next week? Let us know in the comments below.

(Note: All three carriers are bound to make some exceptions, however, for the most part this rule will remain in effect)

While Sony is yet to officially announce its selection of free games coming to PlayStation Plus subscribers in December, the lineup appears to have already leaked. According to the leakers at Deallabs, who have a 100% accurate record of sharing early PlayStation game leaks, Mass Effect Legendary Edition, Biomutant, and Divine Knockout are coming to PlayStation...
Usman Qureshi
26 mins ago