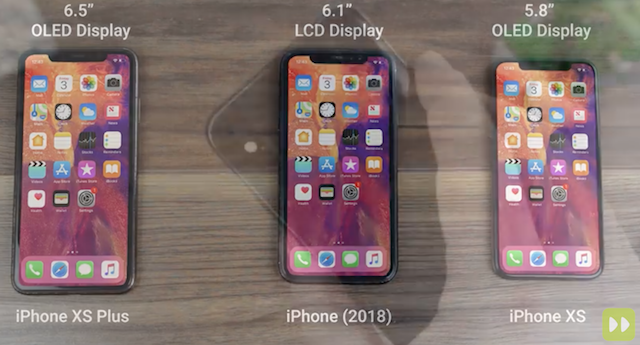 A new YouTube video shared by the folks over at MobileFun compares high-quality mockups of the rumoured  6.5-, 6.1-, and 5.8-inch 2018 iPhones side-by-side, giving you the best look yet at Apple’s widely rumoured upcoming iPhone variants (via CultOfMac). The source even has a tentative name for each of the three iPhone models.

“Our sources indicate that the largest of the three iPhone’s will be called the iPhone XS Plus, while the 6.1-inch device will be a cheaper budget model called simply the iPhone 2018, with the 5.8-inch model simply being an S series version of the original iPhone X.”

Based on leaked schematics and rumours, the mockup of the OLED ‘iPhone XS Plus’ measures 6.18 x 3.05 x 0.31 inches, which is almost exactly the same size as the iPhone 8 Plus.