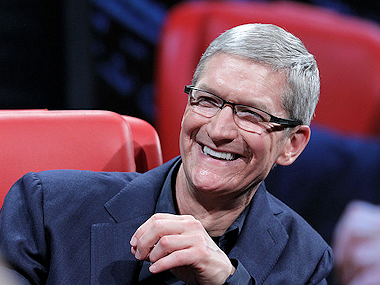 Last week, Apple CEO Tim Cook took the stage at a media event where the company unveiled the iPhone 6 and 6 Plus, Apple Pay, and the Apple Watch.

On Friday, Bloomberg Businessweek’s Brad Stone and Josh Tyrangiel had a chance to interview Cook and ask him about the newly announced products.

In the interview, Cook confirmed that the Apple Watch will have the ability to control your Apple TV and possibly future devices as well. Cook said:

“I love operating my Apple TV from the watch. I don’t have to worry anymore about the remote falling through the cushions of the sofa.

There’s—I don’t think we showed this. I’ve got a little advance copy. And so it will operate your Apple TV, and you can imagine that it can control other things as well.”

Then, Cook talks about Apple Pay and explains why Apple thinks Apple Pay has an advantage over current mobile payment technologies.

“I think we have the first mobile payment solution that can be mainstream, that people can really use. I think most of the other people that ventured into this spent all of their time on the front end thinking about how to create a business model, how to collect data, own the data, sell the data, monetize the data. They were thinking about it in those kind of terms, not in terms of why you would want to use it.”