Blue Jays mania has swept the country as the team moves onto the ALCS. Numerous outlets have shared with us data from final of the ALDS, including Rogers and Twitter.

Rogers announced game 5 of the ALDS garnered the highest ratings ever for Sportsnet, with 4.85 million viewers. The network says overall, 11.5 million Canadians watched some part of game 5, with audience levels peaking at 8.1 million as of 7:44PM EDT at the top of the 9th inning, when Roberto Osuna struck out the final batter, Will Venable.

Rogers Centre saw an average of 20,000 fans connected to the stadium’s Wi-Fi network during three home games of the series, with 229% more content shared over the network during game 5 versus the average of the entire regular season.

Twitter emailed iPhone in Canada the following tweet volumes from game 5 and the series as a whole. Check them out below:

Check out the October search surge, as we head into the latter part of this month—more people are searching for ‘Toronto Blue Jays’ versus ‘Election’: 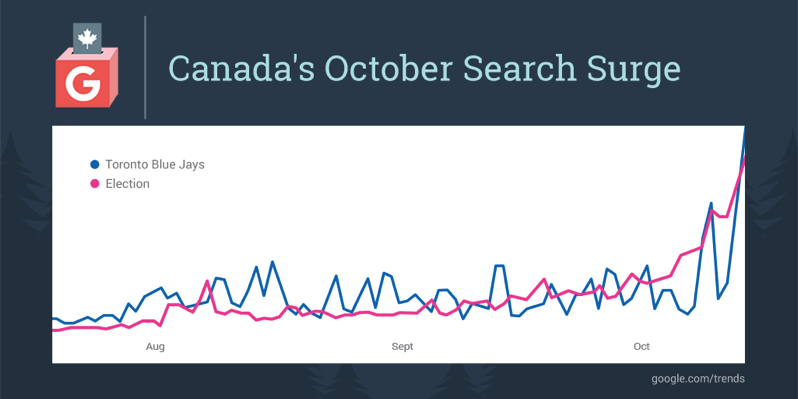 Game 3 of the ALCS is set to take place at Rogers Centre on Monday, October 19—the same day as the election. Many suspect Twitter will explode with two major events taking place at the same time. Get out and vote people, then come home and watch the game!