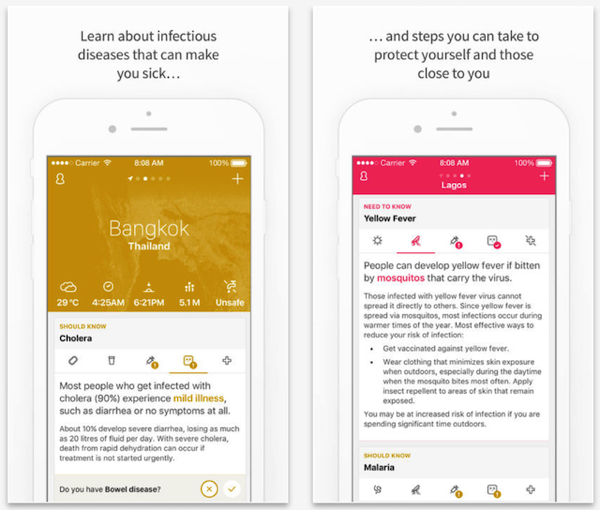 Toronto-based company BlueDot, founded by Dr. Kamran Khan, an infectious disease specialist at St. Michael’s Hospital, has developed a new app that informs travellers about disease outbreaks in the areas they are headed to, CBC News reports. The app is called ‘George Health Companion’, and is now available as a free download in the App store and Google Play.

“The purpose is to get people to think about the fact that we live in this very inter-connected world and that germs can quickly spread from one part of the world to another, and by protecting ourselves against some of these types of diseases we are in fact protecting the world around us,” Khan told CBC Radio’s Metro Morning on Thursday.

Khan, a Toronto native who studied in New York and Boston, became aware of the issue when he returned to work in Toronto in 2003, just as the SARS outbreak was hitting. “That was kind of that ‘a-ha’ moment,” Khan said. “Diseases can spread incredibly quickly and you can have these tiny little viruses really cripple a city, which is what we saw here in Toronto.”

BlueDot, which consists of some 50 experts, uses data from air travel, as well as satellite weather data and information about disease outbreaks around the world, to study how germs can spread. The George Health Companion app uses this data to educate users about diseases in the areas they are travelling to, what that information might mean for them, and how they can best protect themselves.

Given the outbreaks in recent years of SARS, MERS, Ebola and Zika, Khan said, another major outbreak “is inevitable”.