Scott Forstall mentioned on stage at WWDC 2012 that numerous automobile manufacturers have agreed to implement a new wireless feature called Eyes Free. This allows for drivers to speak to Siri and perform other actions, built into the setup of the car.

Fast Company spoke with numerous car makers noted within Forstall’s presentation, such as BMW, Mercedes, GM, and Jaguar to confirm what their plans were when it came to Eyes Free.

Mercedes said integration will be via their app MBrace, set to debut in “a little over six months”. What’s even more notable is they company confirmed there would NOT be a dedicated Siri button, but integration with existing buttons on the steering wheel (just like BMW):

“We’re going to be taking it a step further by allowing iPhone users to plug their iPhone into the car and access a Mercedes-Benz app that will then take over the screen,” Boland adds. “It’ll allow navigation, Facebook–whatever is on your iPhone; that includes if you have an iPhone 4S or higher with Siri, then you’ll have Siri in the vehicle as well.”

BMW product spokesperson Dave Buchko also echoed existing controls on the steering wheel will be used to activate Siri, as we saw in the image displayed at the WWDC keynote slide:

“Apple’s new eyes-free mode enables drivers to use Siri to interact with their iPhone by voice even in the car. Users can not only make a call but also tune in to their favorite music, send a text message, create reminders, set alarms, or create events without ever having to look for their phone.” 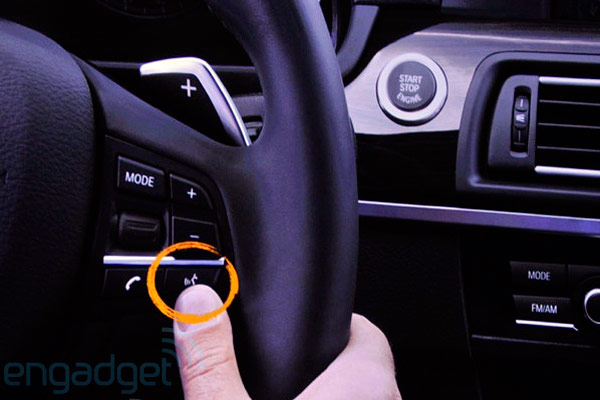 As for Audi? They told Fast Company they are “working closely with Apple to see how this might be integrated into our cars, but there’s nothing firm to report at present.”

GM said they couldn’t elaborate but said they wanted to ‘amplify the smartphone’, but did acknowledge their Chevrolet brand had teamed up with Apple, with something to come in 12 months or less. Chrysler refused to elaborate or acknowledge Apple’s Siri announcements, to the point where they almost looked unaware.

Jaguar and Land Rover confirmed they were working with Apple but didn’t say much other than they are “looking forward to introducing the [Siri] feature in future models.”

Toyota mentioned they have teamed up with Apple and are exploring the possibility to integrate the Siri Eyes Free Mode (SEFM) platform into Toyota, Lexus, or Scion line ups, but noted there were no planned apps as of yet. Honda was unavailable as of press time.

With Siri expanding its language and local search support to Canada this Fall with iOS 6, it’s an exciting time to own an iPhone 4S (or new iPad).