With the recent release of iTunes 11.1 two days ago, a new bug has emerged which has prevented users from deleting podcasts, and previously played older podcasts have reappeared via iCloud, first brought to our attention by iPhoneinCanada reader Corey. 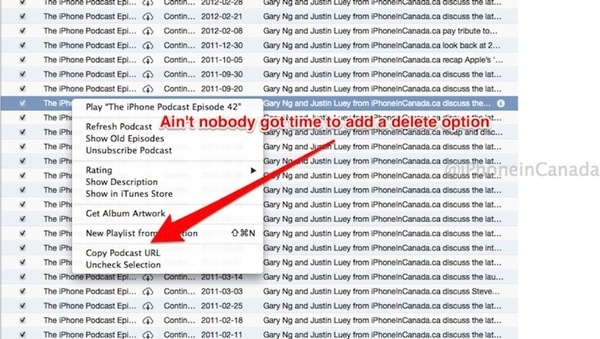 The issue is widespread and customers have started numerous threads in the Apple Support Communities offering detailed accounts of the frustrating issue:

I installed the iTunes version that came out yesterday, and now any podcasts I’ve listened to and deleted have suddenly reappeared, with an iCloud icon against them. But delete doesn’t work.

Selecting them and pressing delete has no effect. For downloaded, locally stored items, pressing delete throws up the usual dialog, but if I go ahead and delete, the file is deleted locally, but the item remains in iTunes but with the iCloud icon added.

Right-clicking gives no option to remove it from the list, and I can’t see any option in Preferences to prevent this behavior. Nor can I see anything relevant to it in the iCloud control panel.

This messes up the list big time, with some podcasts showing two years of items. What are they thinking?

From what we’ve heard, beta versions of iTunes 11.1 do not appear to be suffering from this issue. Anyone else dealing with this right now?