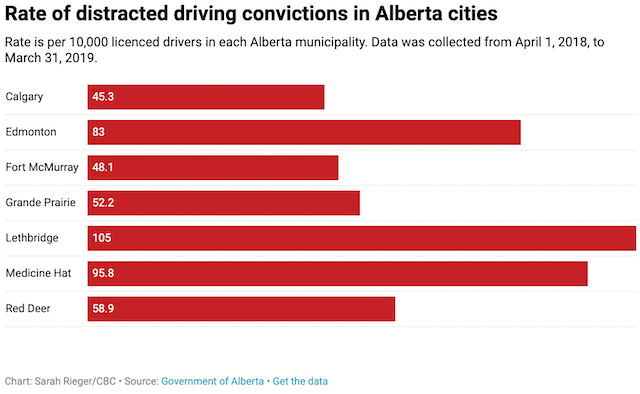 During the same time period, however, distracted convictions in Edmonton have increased by 42% while also being the only city in Alberta where the number of convictions has increased over the last 5 years.

But in terms of the rate of distracted driving convictions, Edmonton was far from the highest, with rates of 95.8 per 10,000 drivers in Medicine Hat and 105 per 10,000 in Lethbridge.

Distracted driving contributed to an estimated 21 per cent of fatal collisions and 27 per cent of serious injury collisions across Canada in 2016, according to Transport Canada’s National Collision Database.

More men were also convicted of distracted driving last year than women — 14,474 men across the province, compared to 8,964 women. That gender imbalance has stayed fairly consistent over the past five years.

The penalty for distracted driving in Alberta is a $287 fine and three licence demerit points.