Facebook will begin alerting users whose private data may have been compromised in the Cambridge Analytica scandal starting Monday. 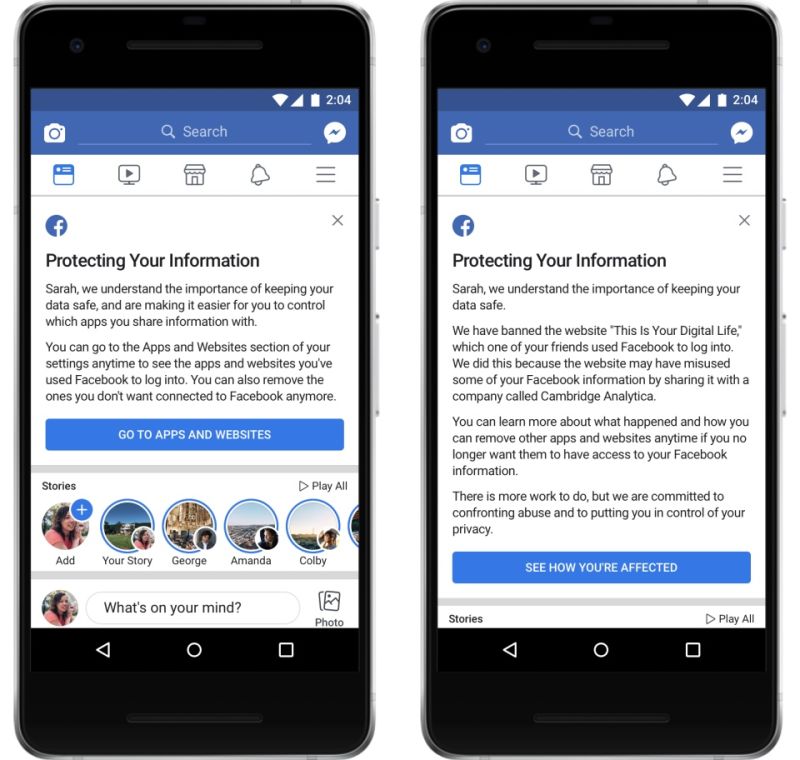 According to a new report from BBC, the 87 million users who could have had their data shared with Cambridge Analytica will get a detailed message on their news feeds. Facebook says most of the affected users (more than 70 million) are in the United States, though there are over a million each in the Philippines, Indonesia, and the United Kingdom.

Above the link, users who may have been affected by the data scandal will see the message: “We have banned the website ‘This Is Your Digital Life,’ which one of your friends used Facebook to log into. We did this because the website may have misused some of your Facebook information by sharing it with a company called Cambridge Analytica.”

Additionally, all 2.2 billion Facebook users will receive a notice titled “Protecting Your Information” with a link to see what apps they use and what information they have shared with those apps. If they want, they can shut off apps individually or turn off third-party access to their apps completely.

The alert also contains information on how users can find out if other apps and websites have access to their Facebook information. “There is more work to do, but we are committed to confronting abuse and to putting you in control of your privacy,” the alert concludes.

Last week, Facebook COO Sheryl Sandberg revealed that the social network was aware Cambridge Analytica may have been mishandling users’ data two-and-a-half years ago but acted insufficiently to prevent it.

“We thought it had been deleted because [Cambridge Analytica] gave us assurances,” Sandberg said. “But what we didn’t do was the next step of an audit and we’re trying to do that now.”