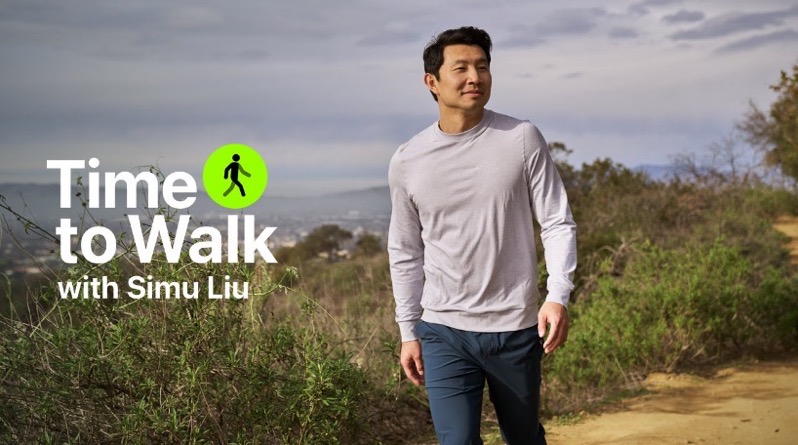 Canadian actor Simu Liu is the latest celebrity featured in the Apple Fitness+ Time to Walk series, which essentially offers a walking workout with interviews from the “world’s most inspiring people”, via your Apple Watch.

Liu first made waves on the CBC TV sitcom Kim’s Convenience and more recently his lead role in the Marvel Cinematic Universe motion picture, Shang-Chi and the Legend of the Ten Rings.

“Actor Simu Liu is best known for his role in Marvel’s “Shang Chi and the Legend of the Ten Rings.” He talks about how he struggled to live up to his parents’ expectations and why inspiring pride in the Asian community is so important to him,” reads the episode description.

Apple’s pick of Liu for this current Time to Walk workout coincides with Asian American Heritage Month in the U.S., with the episode spanning 39 minutes.

“We talk about progress a lot. That’s definitely true. I think we are making progress as a society. But then, in the wake of anti-Asian hate crimes, there is also still prejudice that exists,” said Liu.

“And so, this May, I hope everybody is able to think about the definition of what it means to be American, Canadian, or whatever have you. For myself and for my parents, we’re all Canadian citizens, pay taxes, but we have faced discrimination and have been made to feel like we don’t truly belong. And I hope everybody listening can feel like they do belong and can feel proud of who they are, feel proud of their background, and will continue to fight so that our future generations will not face the prejudice and the discrimination that we did,” explained the actor.

Songs featured in this Time to Walk episode chosen by Liu as part of his story include Heartless by Kanye West; Ghost by Justin Bieber; and My Time (feat. Jeremih) by Fabolous.