iPhone 4S pre-orders kicked off around the world last Friday, and now it appears numerous orders have shipped, including those from Canada. iPhoneinCanada.ca reader @AbsolutReh was able to track down his order for his iPhone 4S destined to Coquitlam, BC, via UPS.com: 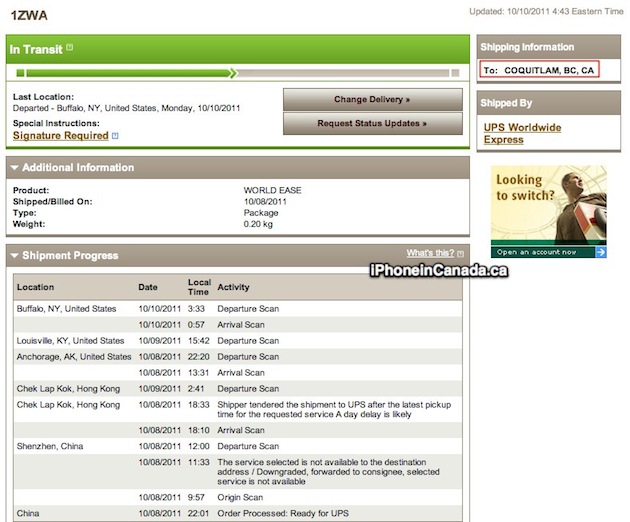 The method used is exactly what we told users to do to track their previous iPhone 3G orders from Rogers/Fido back in 2008. You can try it for yourself below:

1. Visit www.ups.com
2. Click on the “Tracking” tab on the top left.
3. Click on “Track by Reference” on the left column.
4. On the page, where it says “Shipment Reference”, enter your Rogers/Fido phone number, including area code.
5. Click “Track” on the bottom right.
6. If your order has been entered into the UPS system, VOILA! Your shipment details should be there!

iPhone 4S pre-orders in Canada are available from Apple, Rogers, Fido, Telus, Bell, Virgin, and Koodo. You can make pre-orders from Future Shop (until today) and Best Buy (until launch day). There really is no excuse to not be able to pre-order an iPhone 4S in Canada given all our carrier choices!

My order status is still at “Processing Items”. What’s yours at?