Created in partnership with the HSBC Bank Canada, the Royal Canadian Legion has unveiled its new tap-enabled electronic donation boxes, which will allow Canadians to pick up a poppy and donate to the Legion with a simple tap as a health safety measure amid the COVID-19 pandemic (via CTV News). 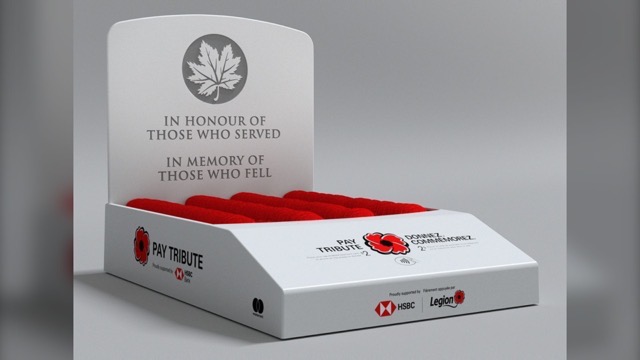 “We are excited to present this new way to make it easier for Canadians to donate during the National Poppy Campaign,” said Thomas D. Irvine, Dominion president of the Royal Canadian Legion.

To use the donation box, Canadians can use a tap-enabled credit card, mobile phone or wearable device and place it near a glowing poppy logo on the front of each donation box. The tap will then automatically make a $2 donation to the Legion and the user can pick up a poppy pin.

“We’re proud to work with the Royal Canadian Legion, to help serve the veterans that served our nation at time of conflict and while maintaining peace,” said Larry Tomei, executive vice president and head of wealth and personal banking at HSBC Bank Canada in a release Wednesday.

Approximately 200 electronic donation boxes will be set up across Canada between Oct. 30 and Nov. 11. Roughly 25,000 traditional poppy boxes will also be available across the country.

The donations will go towards helping Canadian veterans and their families.