Tesla finally unveiled its relatively inexpensive ‘Model 3’ electric car yesterday, with CEO Elon Musk announcing that over 115,000 people have already ordered the car, even though it is more than a year away from production. 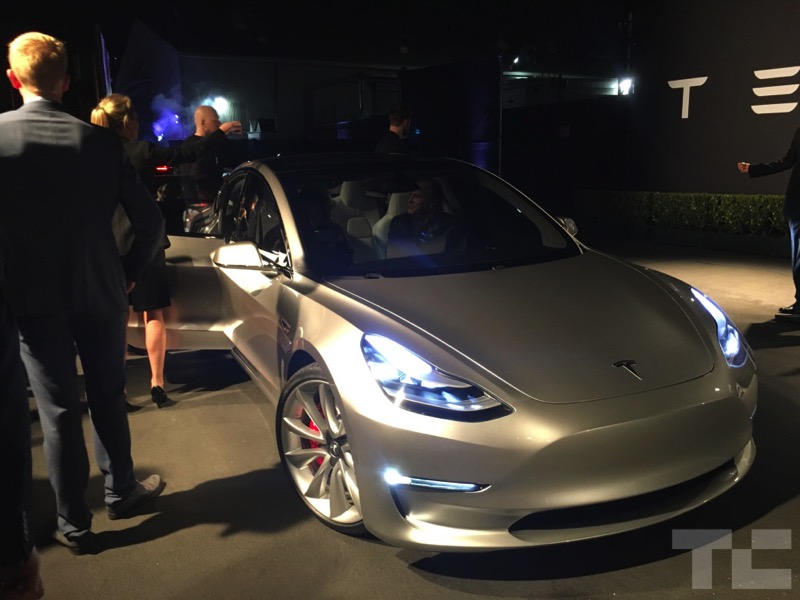 The new Model 3 has a 15-inch widescreen touchscreen in its centre console, rumoured to be supplied by LG Display.

Earlier this morning, Musk tweeted 180,000 orders in 24 hours, and at an average selling price of $42,000 with mixed options, that is $7.5 billion in sales in a single day, saying “future of electric cars looking bright!”

A subsequent tweet noted the number standing at 198,000 deposits, urging people to order soon as the wait time is “growing rapidly”.

Thought it would slow way down today, but Model 3 order count is now at 198k. Recommend ordering soon, as the wait time is growing rapidly.

Starting at $35,000 (U.S.), customers around the globe lined up outside Tesla’s showrooms Thursday to pay $1,000 CAD reservation deposits for Model 3, including numerous Canadians, outside Tesla locations in Vancouver, Calgary, Kitchener-Waterloo (Update: this showroom has closed; thanks Rudy), Toronto, Montreal and Quebec City.

Canadian Tesla Model 3 pricing is to-be-announced. We called Tesla headquarters this morning and the sale rep confirmed no information on Canadian pricing is available yet, noting “everything is so new” with Model 3 and its announcement.

The rep did refer to the $35,000 USD base starting price, which applied at today’s Canadian exchange rate would be roughly $45,571.

Global News says currently there are no federal incentives for electric vehicle buyers in Canada, but current Tesla Model S and X models qualify for $3,000 cash-back in Ontario, while B.C. and Quebec have clean energy vehicle incentives.

Tesla pre-order deposits are fully refundable up until production orders begin, slated for late 2017, so there’s no guarantee all deposits will end up fulfilled as orders, since some may cancel and they are non-transferable.

However, the anticipation of the Tesla Model 3 feels familiar to the launch of the original iPhone back in 2007, when Apple and Steve Jobs changed the smartphone game. With Apple rumoured to be developing their own electric vehicle, the combustion engine automobile industry is set to be disrupted, big time.

Current Tesla models can be ‘summoned’ from your iPhone or Apple Watch, making them the perfect companion for Apple owners.

You can check out Tesla’s Model 3 unveiling keynote from last night, below:

Musk says part 2 of the Model 3 unveil is coming later and will be “super next level” (Elon Musk is the frickn’ man). The number of reservations for Model 3 have now eclipsed total sales of all previous Tesla cars combined.

What’s great about the Model 3 is it’s going to push the automobile industry to further adopt affordable electric vehicles–competition is a beautiful thing for consumers.

Update: Here’s what a Tesla spokesperson responded when we asked about Canadian pricing: “Model 3 will start at $35,000 US. We haven’t yet confirmed pricing internationally.”