There has been much buzz around Uber lately in Canada: Taxi drivers are fighting the ridesharing service with every means, but what’s more important is what Canadians want. The Angus Reid Institute’s survey answers this question: Canadians want Uber, but regulated as taxis are (via CBC News). 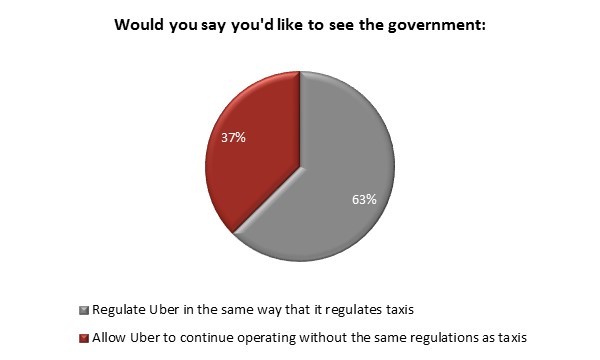 Sixty-three percent of Canadians say that the government should regulate Uber the same way it regulates taxis, compared to 37% who say Uber should continue operating in its current form (without those regulations). While most regions support the idea of regulating Uber, Québec stands out of the crowd with 72% choosing this option.

Interestingly, when it comes to regulating Airbnb the same way hotels are, Canadians tend to favour the service the other way round: The majority (57%) say the government should allow Airbnb to continue operating without the same regulation.

People who have used Uber are most likely to take the opposite position. Some 60 per cent of past Uber users say the company should be allowed to continue operating without the same regulations as taxis. Of course, this means that even a sizeable portion of Uber’s Canadian user base (40%) would prefer to see the company subjected to the same regulations as taxis, rather than not.

When looking for an answer to what the “right circumstances” mean exactly, the Angus Reid Institute has found that Canadians are after additional options and a better taxi service.

– 67 per cent of Canadians agree with the statement “Cab companies should step up their game to compete with Uber”
– 46 per cent agree that “Cities that don’t allow Uber are stifling competition” (28% disagree; 26% are unsure)

An interesting highlight of the study is that the majority of Canadians feel uncomfortable with Uber raising prices during peak hours, and 39% worry that “Uber will make working conditions worse for their own drivers and taxi drivers.”