Speaking with CNBC earlier in January, activist investor Carl Icahn expressed his belief that Apple stock is still undervalued and he would update his price target from $203. Back then, AAPL was trading at $115.78. Fast-forward to today, and Icahn has issued a letter to his Twitter followers (205k) with his new price target: $216.30. 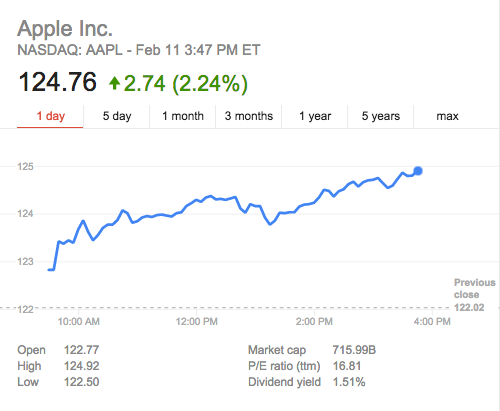 He was pleased to hear that Tim Cook doesn’t want Apple to sit on its pile of cash; instead he wants to give the cash Apple doesn’t need back to its shareholders. Based on Cook’s words, Icahn anticipates that Apple will announce large stock repurchases in April.

His company now owns 53 million Apple shares, worth $6.5 billion as of now. The company hasn’t sold any of them, and it certainly doesn’t plan to do so, as Icahn firmly believes that “the market should value Apple at $216 per share.”

Looking forward to fiscal year 2015, Icahn increased his forecasted earnings per share from $9.60 to $9.70.

After looking into his crystal ball, Icahn has thrown in the possibility for Apple to launch a TV next year, which could accelerate the earnings per share (EPS) by over 31% a year.

We believe this P/E multiple discrepancy between Apple and the broad market index is totally irrational. It seems to us the market is somehow missing a very basic principle of valuation: when a company’s future earnings are expected to grow at a much faster rate than that of the S&P 500, the market should value that company at a higher P/E multiple. In FY 2016 and FY 2017 we forecast in our model EPS growth of over 20% per year, and if Apple introduces a TV in FY 2016 as we expect, this EPS growth accelerates to over 31% per year in our model. Because of this, we believe the market should value Apple at a P/E of at least 20x, which together with net cash of $22 per share, would value Apple shares today at $216 per share. This is not a future price target. $216 is what we think Apple is worth TODAY. Also, to the extent Apple introduces a TV in FY 2016 or FY 2017, we believe this 20x multiple is conservative.

You can read Icahn’s letter in full on Shareholders Square Table.