Caviar’s new custom iPhone 12 Pro dubbed ‘Musk be on Mars’ is now up for pre-order, with price starting at almost US $5,000. The limited-edition custom iPhone 12 Pro sports a fully custom backplate with a SpaceX Dragon spacecraft graphic celebrating the first crewed SpaceX mission (via SpaceExplored). 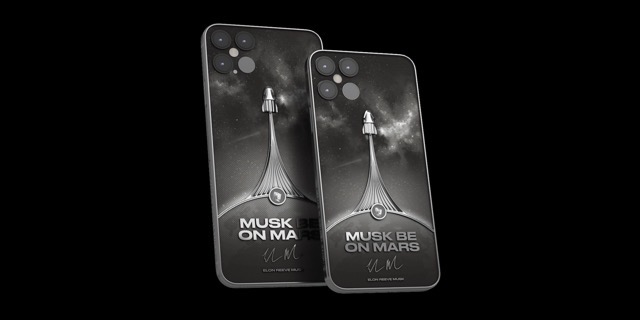 Featuring the ‘Musk be on Mars’ phrase and an imitation Elon Musk signature, the backplate is made out of titanium, according to Caviar. The Russian-based luxury company claims that a tiny piece of material is also embedded from “the SpaceX mission that was in space” in the backplate (sounds too good to be true).

“Become a member of the SpaceX mission – possess a real piece of the spaceship,” notes Caviar.

“The body of the model Discovery Musk Be On Mars has a built-in real piece of the SpaceX mission that was in space. This is not just an accessory, this is a valuable artifact. Owning it, you become a member of a space shuttle crew, a piece of history, a hero who conquers the space.”

Caviar claims it is making only 19 of these custom iPhones for the limited run. Check out the video below and share your thoughts with us in the comments section.