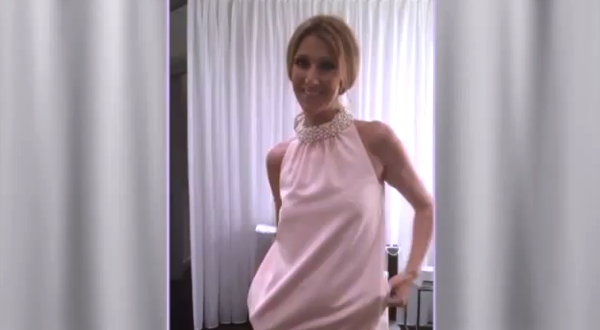 By now you’ve probably seen the viral video of Canadian Richard Dunn and his Celine Dion cover filmed inside the Las Vegas airport on his iPhone. Dunn’s touching and graceful swan-like rendition of Dion’s 1996 single “All By Myself” (actually a cover of Eric Carmen’s 1975 single) exploded on the Internet this week.

As for the video, in four days it has garnered 11.8 million views (yesterday it had 6.3 million views alone). The video eventually made its way to Dion, who responded to Dunn by uploading the following 26 second message to her YouTube channel:

Dion informs Dunn she “loved” his tribute and even invites him to be her guest the next time he’s in Vegas while also adding “you’re more than welcome to use my bathroom.”

Have you seen this fun video set to “All By Myself”? http://t.co/Qzx7BcKvX8 See what Celine thinks! http://t.co/cnQ5eq9VQl–TeamCeline

Dunn currently lives in Canton, Georgia and works as a lighting designer, but is originally from Moncton, New Brunswick, according to Global News.

The night began when Dunn voluntarily bumped himself from two consecutive Delta flights in exchange for vouchers, leading him to spend a night at the airport waiting for his 6AM flight.

He told CTVs’ Canada AM in an interview this morning “I’ve been a video hack for 10 or 12 years,” and also said he got lucky with his viral sensation, noting “Mark my words, you won’t remember me in three days.”

To film his video, he used his iPhone attached to the handle of his computer bag (thanks to a roll of tape from an airport worker) sitting in a wheelchair. Most of his shots had his iPhone taped to a ruler, as his 2AM filming took three hours of shooting and four hours of editing for the final five minute production.

Although he appeared alone in the airport, Dunn says slot machine attendants and some unimpressed cleaning staff witnessed his filming: “Bless their little hearts, what they must see overnight in a Vegas airport, they wanted nothing to do with me.”

Our post about Dunn’s performance received well over 2,400 Facebook ‘likes’, leading us to debate if we should stop Apple news and only write about nothing but Celine Dion.