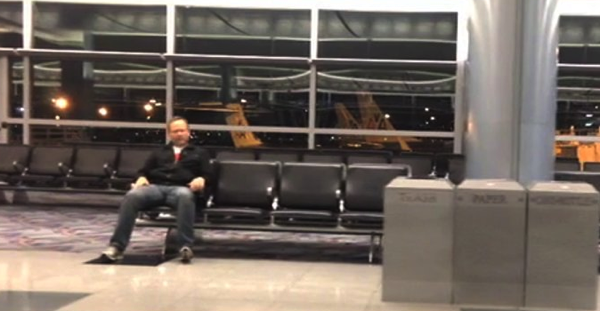 Okay seriously it’s a slow news day this Tuesday, but the following video will brighten your afternoon (or make it horribly worse). Richard Dunn was waiting overnight at McCarran Airport in Las Vegas for his early morning flight and instead of doing nothing—he decided to shoot a Celine Dion video of her 1996 single “All By Myself” (your favourite, don’t lie) on his iPhone.

After the video was made, of course it was picked up on Reddit. He tells Gawker:

“I had a person behind a ticket counter give me a roll of luggage tape before she left. I then used a wheel chair that had a tall pole on the back of it and taped my iPhone to that. Then I would put it on the moving walkway for a dolly shot. I also used the extended handle on my computer bag and taped the iPhone to my handle. I would tuck different stuff under the bag to get the right angle. For the escalator shot I had to sprint up the steps after I got my shot so the computer bag didn’t hit the top and fall back down. Quite fun!”

Just check out the finished product below:

There are no words…

Update: Richard Dunn is a Canadian and is originally from Moncton, New Brunswick, but now lives in Georgia, reports Global News. Respect.

Update 2: Celine Dion has responded to Richard Dunn’s video–check her reply out here.