Burlington-based chartered accountant Justin Gravelle, has developed a new mobile app called CeliTax that lets sufferers of celiac disease keep track of receipts for gluten-free products for a tax credit. According to The Star, the 24 year old witnessed his girlfriend Rachel in pain, who was diagnosed with celiac disease during their college days. 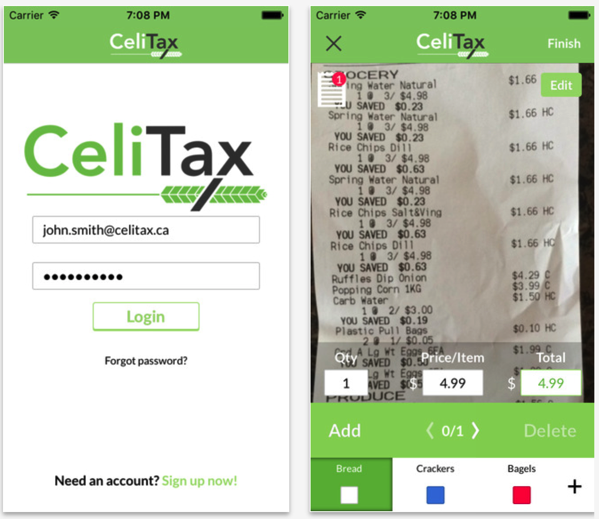 When Gravelle’s girlfriend switched to a gluten-free diet, she wanted to use the government’s gluten-free tax credit, but keeping track of all the purchases throughout the year was not easy. To help her girlfriend and other people with celiac disease track their everyday gluten-free purchases, he released the CeliTax app late last year for iOS, with an Android version coming soon as well. The app digitizes receipts and stores them inside the app, allowing users to review or download them at any time and calculate their gluten-free tax credit in one click.

Sue Newell, operations manager for the Canadian Celiac Association, also agreed that the tax credit can be frustrating for people coping with celiac disease.

Gluten-free items are typically three to four times more expensive than regular items with gluten, Gravelle notes.“Individuals with celiac disease, they’re entitled to the incremental cost difference between gluten-free and non-gluten free products,” he says. But tracking things can be a hassle. Typically, people keep piles of receipts throughout the year, then go through them at the end of the year and enter all their gluten-free purchases into a spreadsheet, Gravelle notes.

The app is available as a free download in the App Store. You can grab it using the following link: