Charge Your iPhone With A Pan 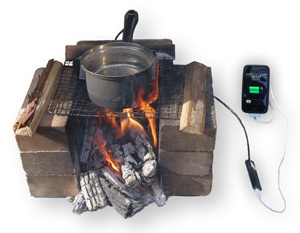 Yes, you read that title correctly – you can now charge your iPhone using the Hatsuden-Nabe Pan Charger over a campfire. We’ve talked about other charging and battery solutions but never a boiling pot of water. [I think it’s more of a pot rather than pan, but the website calls it a pan.]

A company in Japan, TES NewEnergy, has developed a new charging solution for your iPhone. Using thermoelectric strips on the bottom of the pot, heat will be converted to electrical energy and charge your iPhone in 3 – 5 hours. The pot will pump out 5V DC so you can use it for most USB devices – GPS, iPod – and not just your iPhone. It also includes a built-in radio and lantern.

TES NewEnergy, based in the western city of Osaka, started selling the gadget in Japan this month for 24,150 yen ($299), and plans to market it later in developing countries with patchy power grids.

“When I saw the TV footage of the quake victims making a fire to keep themselves warm, I came up with the idea of helping them to charge their mobile phones at the same time,” Fujita said.

$299 is a bit steep to charge your phone but it could be handy when you go camping or in case of a natural disaster.

What other alternative charging solutions do you know of?

[Digital Inspiration via Hack a Day]