Someone Just Paid $330,001 to Have Lunch with Apple CEO Tim Cook

Looks like an expensive round of lunch is coming up for the winner of the Charity Buzz auction featuring lunch with Apple CEO Tim Cook. Bidding ended for the auction today at 11AM PDT and the price paid was $330,001, as noted in the following last minute screenshot supplied by an AppleInsider reader; once auctions end, final bidding prices are not revealed: 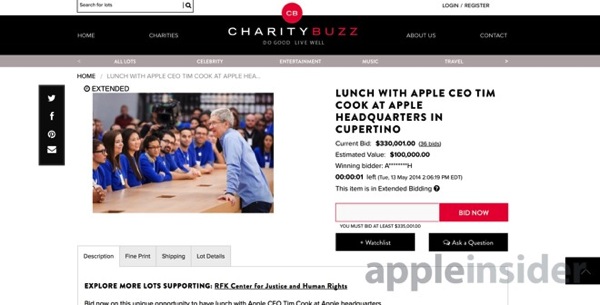 Yesterday, we noted the auction sat at $180,000, but would jump last minute as expected, with another $150,000 coming in at the last minute today. Three days ago, Cook tweeted the winner of this lunch auction would also get to be his VIP guest at an Apple Event, sweetening the deal:

Join me for lunch and advance human rights @rfkcenter.You can also be my VIP guest at an Apple event. https://t.co/02aONVPQM9 #RFKauction

Cook’s participation in this auction was to raise money for the charity RFK Center for Justice and Human Rights. The winner gets to bring a guest to Apple headquarters, where they will get to dine (for free) with Cook for one hour, or at the cost of $5550.02 per minute.

Last year, Cook’s participation for a coffee date resulted in someone paying over $600,000 to meet with the CEO.

Today the first press reviews of Apple’s HomePod 2 hit the web, along with unboxing videos. The second-generation HomePod sports a similar design as its predecessor, has a 4-inch woofer and five tweeters (down 2 from before), plus gains a built-in temperature and humidity sensor, along with automatic room sensing for adjusting audio to your […]
Gary Ng
41 mins ago