Apple Pay looks to be expanding this week to mainland China, but as we exclusively told you yesterday, Canadian bank support may be coming too, as the string “NetworkInterac” was discovered within the code of iOS 9.2.1.

Now, it appears CIBC may be one of the first Canadian banks to support Apple Pay. iPhone in Canada reader John from Toronto tried to add his CIBC Visa to Apple Pay, and was greeted with the following Terms and Conditions message that stated “Apple Pay Terms of Service for CIBC Customers”, which interestingly has a date from September 28, 2015.

John explains the Terms and Conditions appeared after he entered in his CIBC Visa credit card number, expiry and CVC code was accepted. After he tried to tap ‘Agree’, he then received an error saying there was trouble adding his card and to contact his card issuer for assistance. This is a different error message than we have seen so far. 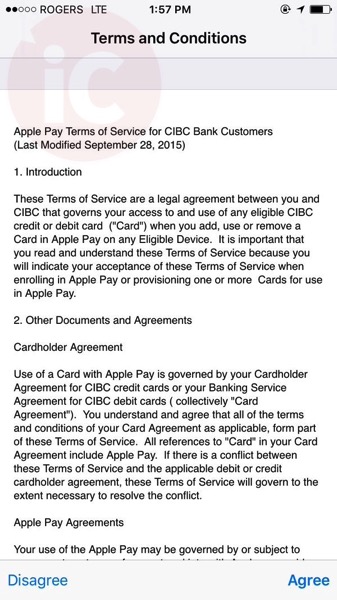 While the CIBC Visa card was unable to be added to Apple Pay, the text of the Terms of Service looks pretty clear support is on the way, as it details “These Terms of Service are a legal agreement between you and CIBC that governs your access to and use of any eligible CIBC credit or debut card (“Card”) when you add, use or remove a Card in Apple Pay on any Eligible Device.”

We tried adding our TD Visa to Apple Pay to see what would happen just now, but again we were greeted with the same “Could Not Add Card” error message. TD Canada Trust accidentally leaked Apple Pay on their website last fall, listed under “Ways to Pay”.

Right now, only cards issued by American Express are supported by Apple Pay in Canada.

Which Canadian bank will support Apple Pay first? The screenshot above points it could be CIBC, as this evidence is very compelling. Let us know what error messages you get when adding your Canadian Visa and MasterCards to Apple Pay.