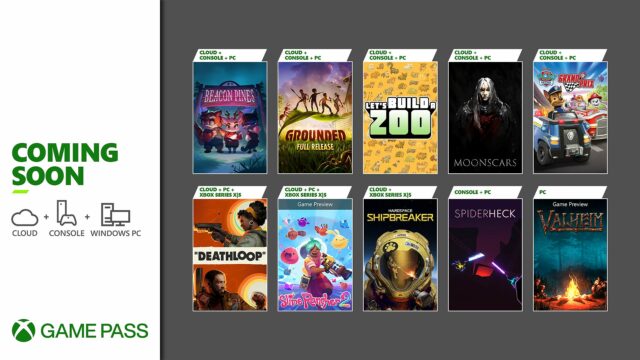 The second wave of games is arriving on Xbox Game Pass, starting today. Rounding out the month of September 2022, Xbox Game Pass subscribers can jump into the likes of Deathloop, Slime Rancher 2, and Grounded’s full launch.

Here are the latest games to arrive on Xbox Game Pass throughout the remainder of September: Deathloop (Cloud, PC, and Xbox Series X|S) – Available Today
As previously reported, Deathloop arrives on Xbox Game Pass today. In Deathloop, two rival assassins are trapped in a mysterious timeloop on the island of Blackreef. As Colt, the only chance for escape is to end the cycle by assassinating eight key targets before the day resets. As the game makes its way to Xbox Game Pass, it includes the Goldenloop Update with a new weapon and ability, cross-play matchmaking, an extended ending, and more. Put an end to eternity today on Xbox One consoles with cloud gaming!

Hardspace: Shipbreaker (Cloud and Xbox Series X|S) – Available Today
Available now with PC Game Pass and coming to Cloud Gaming and Xbox Series X|S today! Equipped with cutting-edge salvaging tech, carve, and slice a variety of derelict spaceships at will in zero-g to recover valuable materials. Be careful with your tools: you don’t want to trigger an explosive chain reaction that could be deadly, or worse – costly! Upgrade your gear to take on more lucrative contracts to pay your debt to Lynx Corporation through a compelling campaign, relax in freeplay, or compete in timed challenges.

SpiderHeck (Console and PC) – September 22
SpiderHeck is a fast-paced couch co-op brawler. Duel to the death against your friends and catch delight as they pull off the ultimate parkour feat, before catapulting themselves face-first into the lava. Or join forces and show those pesky insects who are the real heck masters here!

Beacon Pines (Cloud, Console, and PC) – September 22
Beacon Pines is a cute and creepy storybook adventure where you use charms to rewrite fate. Something strange is happening and Luka and his friends are the only ones taking notice! Sneak out late, make new friends, uncover hidden truths, and collect words that will change the course of fate.

Slime Rancher 2 (Game Preview) (Cloud, PC, and Xbox Series X|S) – September 22
Continue the adventures of ace slime rancher Beatrix LeBeau as she journeys to Rainbow Island, a prismatic paradise brimming with ancient technology, unknown natural resources, and an avalanche of wiggling, jiggling, new slimes to wrangle. A mysterious, new world is waiting for you to explore however you choose!

Moonscars (Cloud, Console, and PC) – September 27
Unravel the mystery of your existence in this challenging, yet rewarding, souls-like 2D platform slasher! As the fierce clayborne warrior Grey Irma, you must push your combat skills to the limit and master new abilities to progress through this stunning yet unforgiving world. Facing off against relentless enemies and the cruel mistress the Moon, you will discover your past and finally find the peace you so desperately desire.

Grounded – Full Release (Cloud, Console, and PC) – September 27
The full release of Grounded is coming on September 27! Experience the full story while you and up to three of your friends explore the entire backyard. Discover how you were shrunk down to the size of an ant and why you were put into the backyard while finding a way to get big again.

Let’s Build A Zoo (Cloud, Console, and PC) – September 29
Let out your wild side with this cute management sim! Import and breed rare creatures, hire the right staff, keep your visitors happy, and deal with plenty of weird and wonderful events. Then try your hand at DNA Splicing, and stitch together over 300,000 different types of animals!

PAW Patrol Grand Prix (Cloud, Console, and PC) – September 30
No track is too big, no racer too small! The PAW Patrol are on their fastest mission yet – To win the Pup Cup! Race around iconic locations including Adventure Bay, Jake’s Snowboarding Resort and The Jungle in this 4-player-championship to find out who will be crowned the winner.

Be sure to check out what was added to Xbox Game Pass earlier this month.