Consensus Is Apple Will Announce One iPhone Instead of Two?

With today’s early morning announcement of Apple’s ‘Let’s Talk iPhone’ media event taking place next Tuesday (AllThingsD was correct), the big question of the day is whether Apple will introduce one or two iPhones.

Once again, the blogosphere has continued to decipher any possible cryptic messages in the invite’s graphic, seen below: 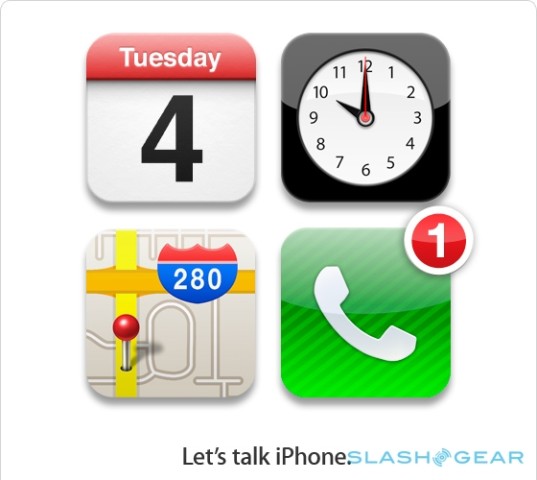 The obvious message by looking at each icon would allude to the following, as Philip Elmer-Dewitt from Apple 2.0 writes:

Apple is holding an event at 10 a.m. Oct. 4 at its corporate headquarters, and if you’re driving from San Francisco, 280 is the route to take.

As for the phone icon, there is one notification badge that you can either interpret as ‘one iPhone’ being announced. It appears Piper Jafray’s Gene Munster also agrees:

We Do Not Expect a Low-End iPhone. Some investors are looking for Apple to announce a low-end iPhone that Apple could sell to carriers for less than $300 vs. the current carrier cost of over $600. This would enable carriers to offer affordable, unsubsidized iPhones and further penetrate more price-sensitive markets. However, we do not expect Apple to announce such a device on 10/4. Rather, we expect Apple to continue with a lead device (iPhone 5) that carriers sell subsidized for $199/ $299 along with a previous generation device (iPhone 4 or iPhone 4S) for $99.

John Gruber from Daring Fireball, always close to sources within Apple also hints at one phone, rather than two:

Something tells me there’s only one new iPhone.

Earlier it was noted the iPhone 5 tapered-design as seen in leaked cases could have occurred via a lost prototype from the Foxconn factory. Rumours of a smaller, cheaper iPhone were reported by Bloomberg back in February, and word from Digitimes the iPhone 5 would include a 4″ screen and the dual core A5 chip used in the iPad 2.

The last time Apple images were ‘picked apart’ dates back to The Beatles hitting iTunes last November, when the phrases ‘Tomorrow is just another day. That you’ll never forget.’ appeared on the Apple website.

The reality is nobody really knows what will announced, unless some last minute leaks occur (which always makes the week leading up the announcements fun times). Up until this point in time Apple has kept us pretty much in the dark (aside from stories of lost prototypes in bars again), but iOS 5 GM being announced is a guarantee since it’s officially Fall.

It will come down to the alleged ‘iPhone 4S’ or ‘iPhone 5’. Which camp are you in?