Analytical firm Flurry has compared consumer time spent in mobile apps on smartphones and tablets with time spent on the web using a browser and broadcast TV. Turns out consumers spend more time on apps as compared to the web and are beginning to challenge television, the top media channel. 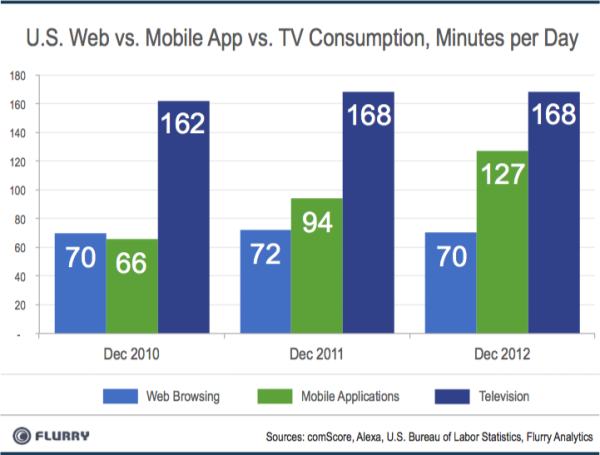 During the month of November, Flurry measured over a trillion events from over 250,000 applications created by more than 85,000 developers, events being actions completed by consumers inside apps such as completing a game level, making a restaurant reservation or tagging a song. According to the firm, the average time spent inside mobile apps by a U.S. consumer has grown 35%, from 94 minutes to 127 minutes in the past one year. In contrast, the average time spent on the web declined 2.4%, from 72 minutes to 70 minutes.

By our measurement, U.S. consumers are spending 1.8 times more time in apps than on the web.

The chart shows that time spent in apps already totals 76% of time spent on television.  With new content released via thousands of new apps each day, we expect this trend to continue.  In fact, we ultimately expect apps on tablets and smartphones to challenge broadcast television as the dominant channel for media consumption. Compared to the 60-year-old television industry, apps are just over 4 years old. […]

The stats on gaming are particularly interesting.  Returning to the Bureau of Labor Statistics survey data, the average U.S. consumer spent 1.2 hours (72 minutes) per day playing a game, on any platform. Our data shows that 43% of time spent in mobile apps, 55 minutes, is spent in games. This means that mobile gaming on tablets and smartphones has absorbed 76% (55 of the 72 minutes) of the total time consumers spend on gaming, anywhere. Now, that’s disruptive.

The chart below shows that 80% of the total time spent is across gaming, social networking and entertainment categories. 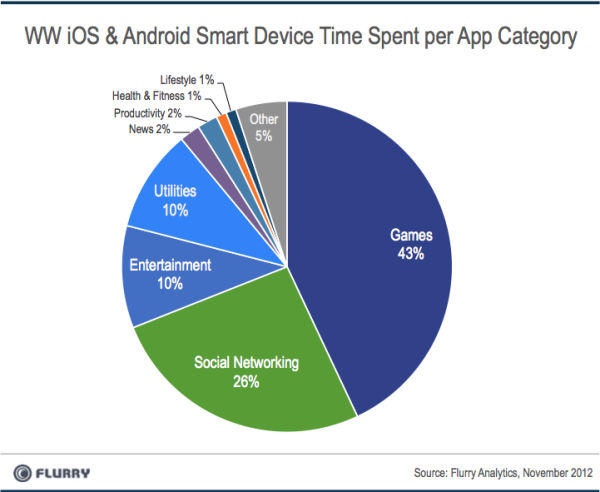 Back in September, Pluto TV announced it would be launching in Canada in December and as of today, the free ad-supported streaming TV service is now live. This new Free Ad-Supported Streaming Television (FAST) service is from Paramount Global, with Corus Entertainment Inc. as its Canadian partner. Pluto TV says it is the world’s leading […]
Gary Ng
4 mins ago

Amazon has revealed its offering of free games arriving for Prime Gaming members. This month, subscribers can gain access to eight titles and new in-game content to a series of ongoing games. December sees Amazon host one final month of free games for the year. Closing out 2022, Prime members can redeem and play Quake,...
Steve Vegvari
60 mins ago