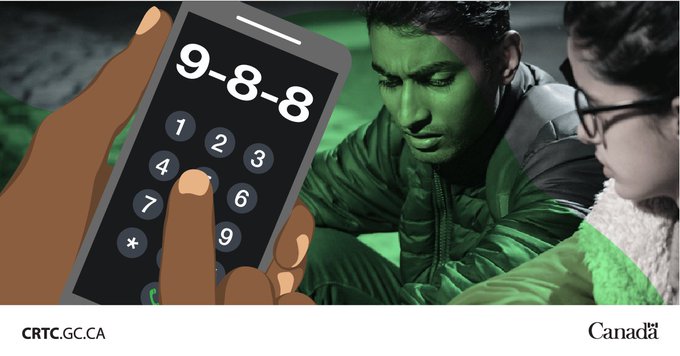 The Canadian Radio-television and Telecommunications Commission (CRTC) announced on Wednesday it will launch the number 9-8-8 for Canadians to call or text when they are “in need of immediate mental health crisis and suicide prevention intervention.”

The CRTC says the number will be implemented by telcos and wireless service providers, and will be free of charge. Any calls or texts will be directed to a mental health crisis or suicide prevention service, also complimentary and available 24/7.

For 9-8-8 to work across the nation, the CRTC says some areas where 7-digit dialing is still the norm, need to transition to 10-digit dialing. This includes Newfoundland and Labrador, northern Ontario and the Yellowknife area. Service providers are being ordered to complete the transition to 10-digit local dialing in these areas by May 31st, 2023; an additional six months will be made available for providers to support 9-8-8 for texts and calls.

“We are taking a significant step in making mental health and suicide prevention resources more accessible to everyone in Canada. A single, easy to remember point of contact will provide much-needed help to those in crisis and will be crucial to saving lives. Although much work is left to be done to bring help to people who need it, we have set accelerated timelines to ensure that 9-8-8 is implemented as quickly and as efficiently as possible,” said Ian Scott, Chairperson and CEO of the CRTC.

[caption id="attachment_382081" align="aligncenter" width="1000"] Image: Bell[/caption] As Hurricane Fiona makes landfall in Atlantic Canada, telecommunications services are more instrumental than ever in ensuring that Canadians can stay connected with their loved ones and emergency services. To that end, Industry Minister François-Philippe Champagne is organizing telecom operators in the impacted areas to "ensure their services are...
Nehal Malik
22 hours ago