Non-profit organization Poynter Institute has just rolled a new WhatsApp chatbot that allows people across the globe to debunk over 4,000 hoaxes surrounding the COVID-19 pandemic, such as whether the infectious disease originated in a lab in Wuhan, China (via TechCrunch). 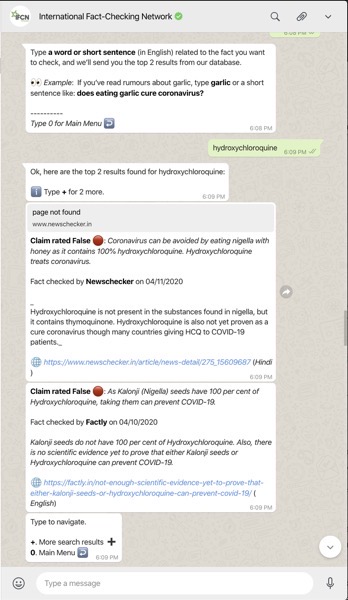 The chatbot, which relies on information supplied by over 100 independent fact-checkers in more than 70 countries, is the world’s largest database of debunked falsehoods related to COVID-19.

According to Poynter Institute, users can test the chatbot by either saving +1 (727) 2912606 as a contact number and texting the word “hi” or by simply clicking on http://poy.nu/ifcnbot without having to save the chatbot’s number.

The chatbot identifies a user’s country and provides them with information that has been fact-checked by an organization that is closest to them.

Once they have texted “hi” to the bot, sending “1” prompts a new message from the chatbot that asks them to enter the keyword or a short sentence of their query. Then you can type “origin,” “garlic” (to know if there is any evidence that this herb helps in fighting with coronavirus — there isn’t) or any other keyword that is on your mind. (You may have to wait for 2-3 seconds every time you engage with this chatbot and let it respond to your query before you ask a new question.)

The service, which is free and works round the clock, is currently available in English, but support for other languages is also coming.