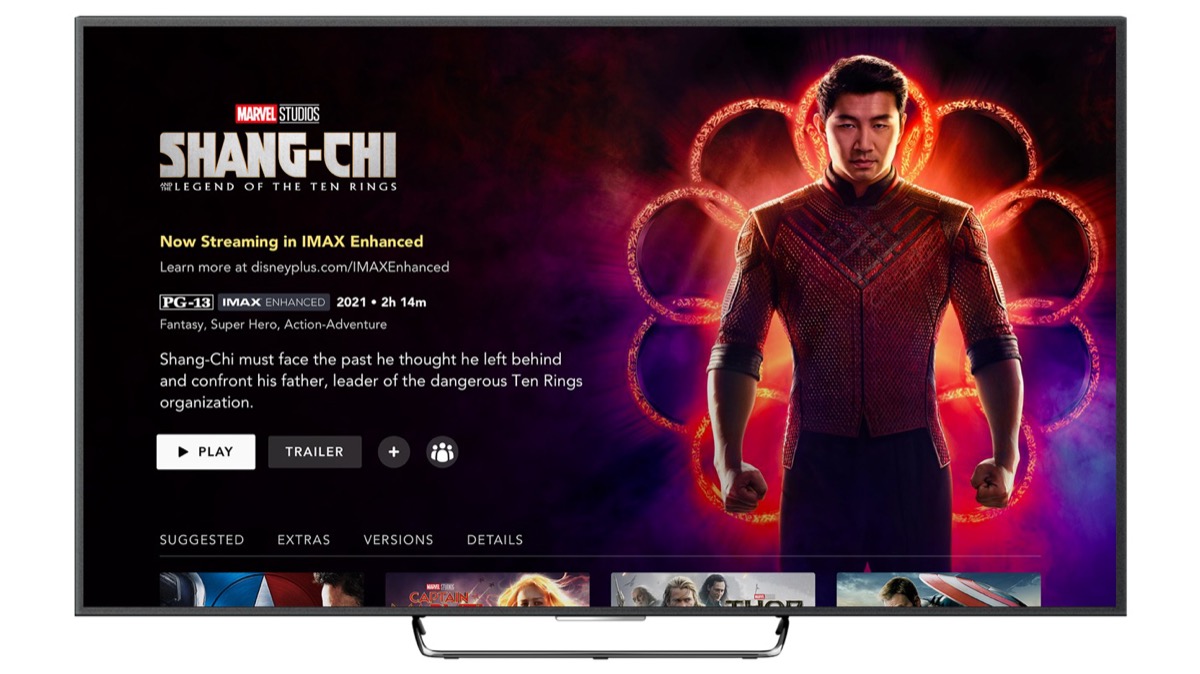 Starting on November 12, the day now referred to as Disney+ Day, Disney will begin offering 13 MCU films in IMAX formatting on Disney+, including Shang-Chi and the Legend of the Ten Rings.

As reported by Engadget, Disney and Marvel will soon offer the 1.90:1 IMAX aspect ratio while watching IMAX scenes shot for 12 MCU films. The page on which Disney first made the announcement appears to have been taken down. However, the report was able to highlight all 13 IMAX enhanced films.

The 13 MCU films to offer IMAX formatting include:

The IMAX Enhanced scenes will fill up the display more than the traditional 2.35:1 widescreen format that MCU films offer when watching each film. The IMAX shots will fill up to 26 percent more screen real estate. Though viewers will likely still notice small black bars on the top and bottom of their screen.

In the future, the IMAX Enhanced formatting will offer DTS sound. The IMAX Enhanced content on Disney+ will also soon support Dolby Vision, HDR10, Dolby Atmos, and of course, 4K, as the report confirms.

Disney+ Day will see a major celebration from Disney. While commemorating two strong years in the streaming world, Disney will premiere new content including ‘Shang-Chi and the Legend of the Ten Rings,’ ‘Jungle Cruise,’ ‘Home Sweet Home Alone,’ and much more.

Click here to sign up for Disney+ in Canada for $1.99 for the first month for new and returning subscribers, available until November 14, only.

Update Nov. 8: In a statement to iPhone in Canada, Disney+ and IMAX have confirmed the IMAX launch this morning, with the 13 films above also available in Canada this Friday. Check the new screenshot above.

“For more than a decade, IMAX has helped filmmakers take fans across the Marvel Cinematic Universe in theatres and now that epic journey crosses into a new world: the home,” said Rich Gelfond, CEO of IMAX. “IMAX, Disney, and Marvel Studios are giving the fans what they want: the most immersive viewing experience throughout the life of a Marvel Studios film, from exclusive theatrical release to the library at-home where they can now watch the Avengers assemble with more picture than ever before.”