At WWDC 2014 today Apple unveiled a new programming language it created called Swift, which will allow iOS and OS X developers to create apps easier in a more modern interface. Part of the introduction of Swift was also a free book Apple touted for download, which is currently available in the iBookstore.

The Swift Programming Language is 500 pages and is described as follows:

Description
Swift is a new programming language for creating iOS and OS X apps. Swift builds on the best of C and Objective-C, without the constraints of C compatibility. Swift adopts safe programming patterns and adds modern features to make programming easier, more flexible, and more fun. Swift’s clean slate, backed by the mature and much-loved Cocoa and Cocoa Touch frameworks, is an opportunity to reimagine how software development works.

This book provides:
– A tour of the language.
– A detailed guide delving into each language feature.
– A formal reference for the language. 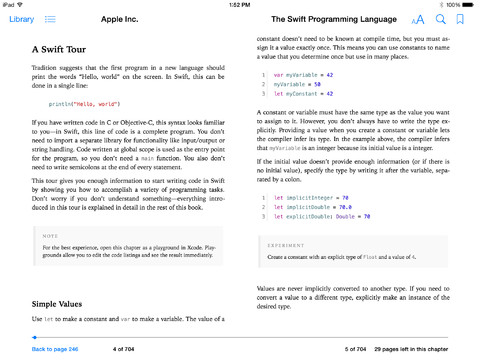 If you’re looking to jump on Swift and learn more about using the language, this free book from Apple looks to be required reading material.

We’re rounding the corner into another month and Bell Media today has shared its list of what’s new on the Crave streaming service for February 2023. February is Black History Month and Crave has highlights featuring Black creators, talent, and cultural figures with various curated special collections. One upcoming title is the TSN and Crave Original […]
iPhoneinCanada.ca
58 mins ago