Last week, Apple demoed the game Oz: Broken Kingdoms during the iPhone 7 launch event to show how powerful the new A10 processors are. Today, the game has been released in the App Store as a universal download for iPhone, iPod touch and iPad, and is available to play for free (via PocketGamer). The turn-based RPG is built around the world of Oz, but not as we know it. 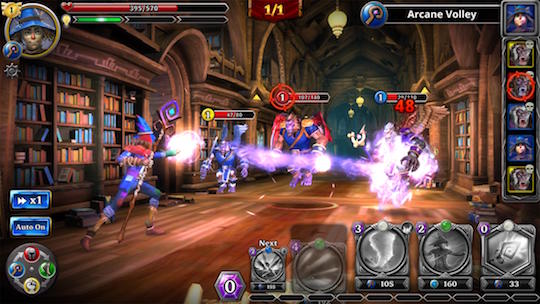 The game lets you tactically command your characters and evolve their abilities as you progress in the game, levelling them up to legendary levels of power. In addition to the single-player story mode, you can also take part in the Arena mode where you’ll join a guild, collect companions to fight alongside your character, and battle competitors in real-time PvP battles to earn rewards.

Battle the Great Darkness that has cast its shadow across the peaceful Land of Oz. Join the kingdom’s brave new heroine Ophelia Shen, along with the legendary heroes of Oz – Tin Man, Lion, and Scarecrow – as they embark on an epic quest to stop the rising evil, restore the balance of magic, and return the kingdom to its rightful glory.

If you’ve got your iPhone 7 or 7 Plus today, this is something you should definitely try out.