If you’re a Dropbox user that syncs large files, the company has announced a new feature called ‘streaming sync’ that is rolling out to desktop users to improve sync speeds for larger files. Here’s how they explain the new feature:

Before streaming sync, file synchronization was split into distinct upload and download phases. This meant that a file needed to be uploaded in its entirety before other clients even began the download.

While this was pretty fast, we were determined to make large file syncing even faster. With streaming sync, we can overlap those phases and “stream” data through our servers to your devices. That means an improved multi-client sync time for large files — typically 1.25x faster, and even up to 2x faster!

The chart bellows shows the improvements with streaming sync and how it’ll impact synchronization speeds for files across your devices: 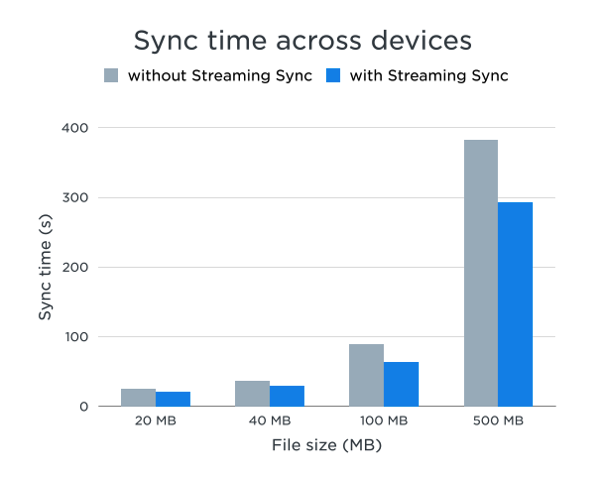 Dropbox says files being synced larger than 16MB will benefit from streaming sync, which will be rolling out “over the next couple weeks” to those using the latest version of their desktop client.

Dropbox’s recent iOS update integrated the iPhone camera to help setup the desktop software on your computer. You can sign up for Dropbox here.