The businessman behind two of China’s most successful smartphone brands, Oppo and Vivo, says Apple’s failure to adapt to local competition allowed his brands to overtake the US company in the world’s largest smartphone market last year. 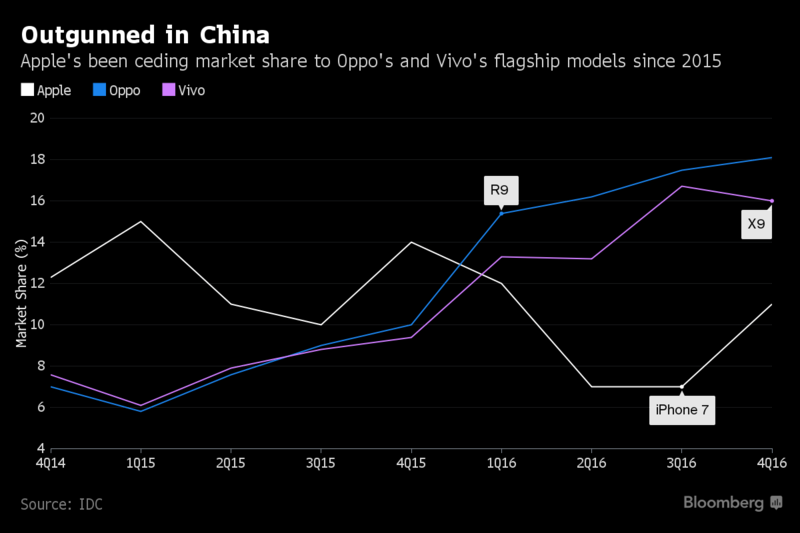 Duan Yongping, chairman and founder BBK Electronics Corporation, told Bloomberg on Monday that while Apple was an “extraordinary company” they couldn’t beat Oppo and Vivo because “even they have flaws.”

“They’re maybe too stubborn sometimes,” said Yongping. “They made a lot of great things, like their operating system, but we surpass them in other areas.”

Yongping’s companies, Oppo and Vivo, are sister brands owned by the very same Guangdong-based BBK. They companies both doubled their sales last year, effectively tossing Apple out of the top three in the Chinese smartphone market and iPhone sales fell for the first time in the country:

At first, neither label garnered much attention. The iPhone was captivating users with its revolutionary apps system and elegant interface, while BlackBerrys lorded over the corporate market. But Oppo and Vivo then developed a marketing-blitz approach that relied on local celebrity endorsement and a vast re-sellers’ store network across China. They crafted an affordable image that appealed to a millennial crowd, then tricked out their devices with high-end specs. On the surface, Oppo and Vivo phones now routinely surpass the iPhone on measures such as charging speeds, memory and battery life.

Oppo and Vivo now control a third of all smartphone sales in China and, besides Huawei, are also the most profitable smartphone manufacturers after Apple.

While his brands are in direct competition with Apple, the reclusive billionaire, who lives with his family and tries to stay removed from the daily operations of his companies, also expressed his admiration for the Cupertino company.

“Apple is an extraordinary company. It is a model for us to learn from,” Duan said. “We don’t have the concept of surpassing anyone, the focus instead is to improve ourselves.”

The founder said he still is an investor in Apple, despite Vivo and Oppo taking charge in China, plus he likes Apple’s CEO. “I’ve met Tim Cook on several occasions. He might not know me but we’ve chatted a little,” Duan said. “I like him a lot.”